He’s not the messiah. He’s a naughty boy. 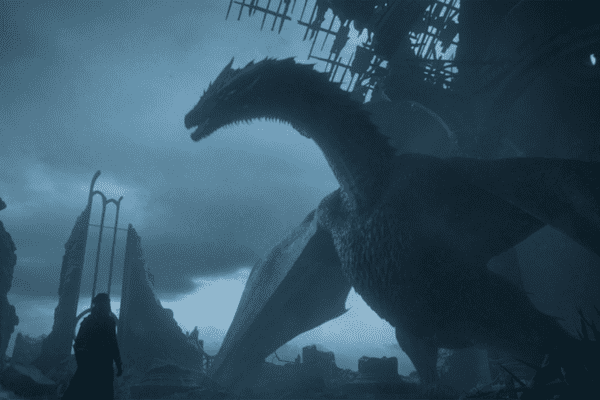 I’ve had a week to reflect on the finale of ‘Game of Thrones’, time enough to avoid spoiling it for other people as well as time to ignore the hysteria of the Twitterverse behaving as if resolving the end of the world in Westeros was going to trigger the immediate collapse of this one.

Did I like the ending? Not really. Watching the leaders of the great Houses agreeing a political, almost technocratic, conclusion to the previous eight seasons of epically flamboyant bloodletting was as fulfilling as listening to the cleaners sweep up the garbage at one of Freddie Mercury’s parties. The cold light of day is always a massive comedown after the epic indulgence of the night before and I felt that Weiss and Benioff misstepped in choosing not to go down in flames, both metaphorical and literal. Instead of dragon fire burnishing a new world order, we got Edmure Tully talking about his hemorrhoids (or something or other), a character so obscure that I was surprised to find he was still alive at all. Like millions, I wanted love to conquer. I wanted Dany and Jon/Aegon to ride into the sunset on the back of her dragon. I wanted freedom and truth and justice and mercy and hot pie to prevail.

And, of course, I realise that what I wanted was self-centred and totally unrealistic. I find it hard to believe that the writers went freestyle on the ending without guidance from George Martin who, we are still led to believe, intends to write his own conclusion to A Song of Fire and Ice. And if there is one thing we know about George, it’s that he takes no prisoners – at least not when there is still one last throat to cut. This was never going to end with a ‘happily ever after’. Dany was wrong. The way to break the wheel of the game of thrones was to stop playing the game. Drogon’s obliteration of the Iron Throne emphatically stated as much. Better for nobody to elevate themselves to being the supreme leader ever again, for no one to have to bear the terrifying burden that power heaps upon frail human shoulders – especially not a psychopathically ruthless and insecure young woman with a father complex and a dragon. What better way to end the vicissitude of dynastic mortal ambition than to nominate a thousand year old spirit to be your leader. And you thought a week was a long time in politics?

But that, of course, means you are left with _that_ ending. In terms of narrative structure, arguably, Weiss and Benioff had nowhere else to go within the confines of the ever tightening noose of seasons 7 and 8. Up to season 7, each cycle of the show was ten episodes. The final two seasons were, therefore, seven hours short of the scriptwriter’s most precious commodity: time. The problem with the ending is not that we didn’t really see it coming, but that we weren’t allowed to see it coming. It wasn’t the story that failed, it was the telling of it.

As a writer, if you oblige your audience to make a deep emotional connection with characters, you have to respect that bond. Right up to the end of the battle for Winterfell, we were meant to care for Dany as if Jorah Mormont’s dying breath was our own. So it was mean and shitty to try and make us pivot 180 degrees on our feelings for our khaleesi, firstly by unleashing her on the population of Kings Landing, in which the dramatic spectacle was constantly being challenged by all those ‘What the fuck is she doing?’ questions short-circuiting our amygdala. And then secondly, by using the ruins of Kings Landing as base camp for a totalitarian cheerleading session in which she made clear that all bets were off. It was like we were watching World War Two in reverse: first the firestorm over Dresden, then the rallies at Nuremberg. From being “you are either with me or against me”, Daenerys had simply decided it was much simpler to assume that everyone was against her. In fairness, I suppose, the writers had at least tried to convey the direction of travel but their big ‘balance of power shift’ scene after the defeat of the Night King got lost in the storm surrounding Cupgate. And turning Varys to ash wasn’t much of a clue either given how close the Master of Whisperers had been sailing to the winds since Robert Baratheon was king.

This is where the absence of those missing hours fatally undermined the final moments of this (still) incredible show. There simply wasn’t time for us to prepare and ready ourselves for the changes the writers were forcing us to accept. Dany’s inversion of character, from mother of dragons and breaker of chains, to She Who Must Not Be Named, was impossibly brief. There is no audience in the world, least of all one as fanatical as Game of Thrones, who could have supported such a conversion. We needed time and as noted, we were seven hours short of all the careful, methodical plotting and exposition that could have prepared us to be ready to turn our back on Daenerys. I mean, they took six whole seasons to reveal what Hodor meant. Surely they could have done a little more to ready us for “You will always be my queen…”

Which brings me briefly to my final point: the actual ending where Jon Snow / Aegon Targaryen rides into the grey dawn of the far northern wilderness surrounded by the free folk. You could forgive him for thinking, “She was right. I know nothing” or, more likely, like the audience, “Was it all for this?” I was glad at least that Jon made it through the carnage but it was a very downbeat and impoverished conclusion to the story of this astonishing man. And again, it’s the rapidity of the final two seasons that conspires against Jon’s narrative.

One can argue that it wasn’t a smart idea for Jon to reveal his heritage to Sansa and Arya but arguing that this misjudgement makes him culpable for Dany going off the deep end is absurd and far-fetched. Basically, Jon Snow is a character who has literally gone to hell (death) and back to be the shield that guards the realms of men. Time after time _after time_ his impeccable bravery, integrity and honesty has been the only thing keeping those realms afloat. And to cap it all, he is compelled to murder a woman he loves in order to save the world from her single-minded ambition. Tyrion could easily have stabbed Daenerys as she revelled in the cheering of her warriors in the ruins. Instead he left it to Jon to do the deed, completing a quite baffling diminution from the wise underdog we always root for, to the tedious coward we’d quite like to see catch one. It’s as if Tyrion’s personality and character shrunk to the size of his physical stature. I can’t believe Peter Dinklage was happy with the script.

But in the case of Jon, given that everyone present at the cleaning up ceremony knew that he was the rightful heir anyway, it was quite bizarre that he wasn’t given any opportunity to speak for himself. How much more powerful would it have been if Tyrion’s “Bran speech” had been given by the one man entitled to make it, Aegon Targaryen, sixth of his name, denouncing the corrupting influence of power, explaining the heartbreaking motive for his actions, and banishing himself to the Wall in favour of his cousin/brother. Then we would have seen the wildfire passion of House Targaryen and the stoic loyalty of House Stark reach their final apotheosis in the person of the “man who would not be king”. The transfer of power, whilst unsatisfactory, would at least have been fulfilling. And maybe in those seven missing hours we could have seen more of Jon’s misgivings about the consequences of power realised, leading us to this moment when the throne was passed to another.

As it was, all we had was a cowardly dwarf telling the assembled leaders that nobody could be a better ruler than Bran the Broken and about 200 million people screaming bullshit at the television as Saint Jon the Bastard lay languishing in a cell somewhere. Maybe that was a subtext too. I mean, how much more like a Roman Centurion does Grey Worm need to look like?

To think that in the end, it all came down to this. He’s not the Messiah, he’s a very naughty boy.

I’m not buying that. I suspect you didn’t either!