I’m terribly sorry, Mrs. May, but I hardly believe a word you say 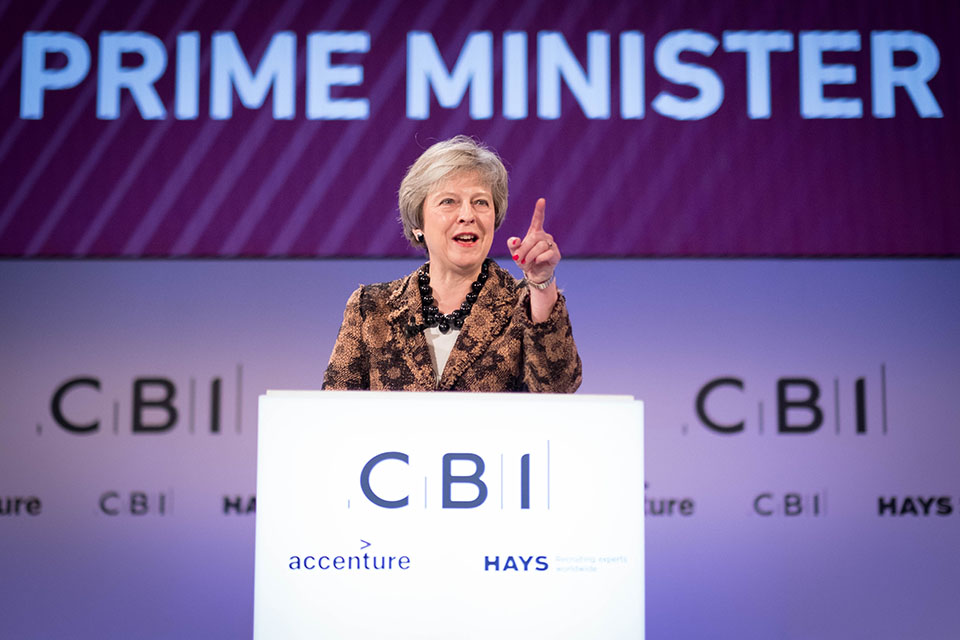 I can’t decide on metaphors for Brexit at the moment. Sometimes I think it’s like a bus being driven by a bunch of drunks who are fighting to take a turn at the wheel, oblivious to the fact that they’re careering the wrong way up the motorway.

At other times, it resembles a horror movie, where the Prime Minister is the heroine forced to do appalling things and sacrifice her principles to escape the clutches of a zombie swarm trying to tear apart civilisation as we know it.

But lately, I’ve been wondering if I’ve got all of this the wrong way round. What if Theresa May is the real threat? What if she’s the force behind the suicidal death cult that is battling at the gates of its mountain holdout while preparing to blow up the compound. And all we can do in the valley below is listen to the gunfire in the heights above us and pray to God there won’t be a landslide.

Like Jacob Rees Mogg, I have no confidence in the Prime Minister, although there our fellowship ends. But in few places are my doubts about the Prime Minister stronger than when it comes to the great Brexit totem of freedom of movement.

Immigration was arguably the decisive issue in the Referendum campaign for all the wrong reasons. In a campaign blighted by misinformation, deceit and (if the Electoral Commission is to be believed) criminal cheating, promises made about this subject swung the vote and created an expectation in the minds of Leave supporters that cannot possibly be satisfied.

Socialists like myself blame voters’ legitimate concerns about the pressure on public services squarely on the Conservative government. The reason why the NHS is in crisis and councils are declaring bankruptcy is not because of EU migrants taking away resources but because Conservative ministers, at the behest of the Treasury, have reduced those resources to levels not seen in Britain since the 1930s. Under those circumstances, I don’t blame ordinary people for lashing out at the target that was set in front of them. It’s just unfortunate that they were deceived into lashing out at the wrong thing and making EU workers a scapegoat.

If one takes government figures at face value, Britain has record numbers of people in work. It’s conceptually impossible to have employment at an all-time high and for immigrants to be depriving Britons of jobs. Of course, there is a debate to be had about the quality of those jobs but it’s not the fault of the EU that the opportunities provided by British economy are increasingly low and semi-skilled positions in the service sector. It’s not the fault of Brussels that Matthew Taylor, the author of the independent report into the gig economy commissioned by the Conservatives, rated the Government’s response to his findings as a ‘four out of ten’. It’s not the fault of MEPs or European Commissioners that demand for labour in these kind of low to middle income roles outstrips availability, which means the UK needs a steady supply of migrant workers. If you don’t accept this, why is it that the Referendum has had barely no impact on net migration except to deter EU citizens from coming to Britain? Why have migrants continued to pour into the UK from every other corner of the globe, and in record numbers? Simply because our economy needs them.

That’s one of the reasons why I think the Prime Minister is the true villain of piece and her speech to the CBI this week is powerful proof. It was under her watch as Home Secretary that resentment towards immigrants was allowed to become the festering issue that now seems to define us as a nation. Instead of stamping on the tiny sparks of intolerant nonsense flickering at the edges of mainstream debate, she fanned the flames with provocative grandstanding like the ‘Go Home’ vans until the whole issue erupted into a forest fire. According to the pollster Ipsos Mori, in June 1997 just 3 percent of British voters ranked “race relations/immigration/immigrants” as being among the top issues facing the country. By June 2016, the month of the EU referendum, that figure had soared to 48 percent. What happened to us?

Even now, when the falsehoods preached by the Leave campaign have been disproved (for example, EU migration has slumped, but have you noticed any improvement in waiting times at the doctor’s surgery?) the Prime Minister has chosen her moment of crisis to relight the fuse of the immigration debate so she can raise the spectre of Poles, Romanians and Albanians coming to snatch nursery places and eat babies if she fails to get her way.

It’s worth looking at what the Prime Minister actually said because so often Brexit politicians say one thing and then later on try to pretend they meant something else, or didn’t actually use the words they were filmed speaking.

The Prime Minister told three lies in Birmingham, lies that she is not being challenged on by the jittery right wing press and the supine BBC.

Her first lie came when she stated “once we have left the EU, we will be fully in control of who comes here.”

Apart from the racists, most reasonable people’s concern about immigration is not that they don’t want any migration, but that they don’t want migrants coming to the UK simply to freeload. What the Prime Minister and hard Brexiteers won’t be honest about, however, is that the UK has always had complete freedom to deport EU migrants who are a burden upon the state. In other countries, like Belgium, if you do not have a job or a means of supporting yourself after three months, you are obliged to leave. These EU rules are available to the UK as well.

Of course, administering such a scheme requires the state to be able to track and monitor the movement of migrants in and out of the country. This is something the UK government has chosen not to do. Its failure is not because of a constraint imposed upon Britain by the Brussels or the European Court. Not only does the UK not track migrants and their status, but it does not collate figures to prove the outlandish claims of benefit tourism. Back in 2013, when Mrs. May was Home Secretary, her department was forced to concede that the Home Office was unable to state the number of EU nationals claiming welfare compared to Britons on social security benefits. Nor could it give figures showing the number of EU migrants making fraudulent benefit claims. This is remarkable given that Brexit supporters continue to argue that we need to end free movement to stop migrants from coming to the UK simply to obtain generous welfare payments. If it were that obvious, why are there no figures? And how can migrants be both benefit cheats and job snatchers at the same time?

The second lie the Prime Minister told was this. “It will no longer be the case that EU nationals, regardless of the skills or experience they have to offer, can jump the queue ahead of engineers from Sydney or software developers from Delhi.”

This is not just a lie but it’s also intellectually obtuse. It’s not the case that engineers and software developers are in the “same queue” as the social care assistants, baristas and other low and semi-skilled workers who make up the bulk of EU migration. As the figures since 2016 prove, once those EU workers stop coming to the UK, they have to be replaced with an alternative labour source. I am categorically certain that those who voted Leave in order to stop foreigners from working in Tescos did not intend for white foreign faces to be replaced with brown ones, but that is the logic of the PM’s words.

And in any event, this obtuseness also fails to mention the obvious fact that immigration doesn’t happen in a vacuum. It’s sensitive to the political economic conditions that exist at any given point in time. Skills shortages and vacancies don’t respect the myopia of the right wing press or the ERG, which is why we have a crisis in social care, with over a hundred thousand unfilled vacancies, at the same time as the Prime Minister is saying her objective is to deter EU workers from coming to the UK.

All the evidence is that she is succeeding. The annual fall of 132,000 in the number of non-UK nationals from the EU working in the UK was the largest annual fall since comparable records began in 1997. It’s a little weird to me that Brexiteers protest melodramatically about being rendered a ‘colony’ of the EU but seem happy to exploit Britain’s historical colonial relationships with Commonwealth nations to attract their citizens to the UK.

Another aspect to the lie is that it was Theresa May herself, as Home Secretary, who vetoed an EU plan to increase the number of immigration visas made available to highly skilled workers from India. Not only that, in 2016, her government also substantially raised the salary threshold for IT workers applying for a Tier 2 visa making it much harder for them to qualify. That followed Britain cutting the period of time for which graduates from India could remain in the UK.

If anyone has gone out of their way to disadvantage software developers from Delhi, therefore, it is the British government.

EU freedom of movement is not denying them the opportunity to come to the UK since the Home Office could simply choose to admit as many non-EU citizens as it wants, at any time. The reason it can’t is because of the absurd absolutist pledge to lower net migration to the tens of thousands, regardless of economic circumstances or the needs of business. If EU citizens choose not to, or are barred from, entering to the UK, then the country will need to admit foreign workers from other regions. There is not a snowflake’s (no pun intended) chance in hell of reducing net migration to the tens of thousands. All we will do is move the source of where foreign migrants are coming from. As a Remainer, I certainly didn’t vote for that but neither, surely, did the Leavers.

That’s the Prime Minister’s third lie when she said her deal “needs to command the confidence of the public by putting them in control of who comes to this country”. Put bluntly, it doesn’t put them in control of anything. And it strikes me as a dereliction of leadership and governance to suggest that the ideal model of democracy is one in which popular opinion, with its fast moving and fickle pre-occupations, should be our guiding star. Even two thousand years ago, the Greeks warned us about appeasing the monster of public opinion. Those who handle the monster do so by peddling power rather than truth. We should heed the dangers in Thrasymachus’s words when he declared that “justice is nothing more than the interest of the stronger.” With various criminal investigations now pending into the Leave campaign, never has that seemed more true, nor the phrase “the will of the people” more hollow and empty.