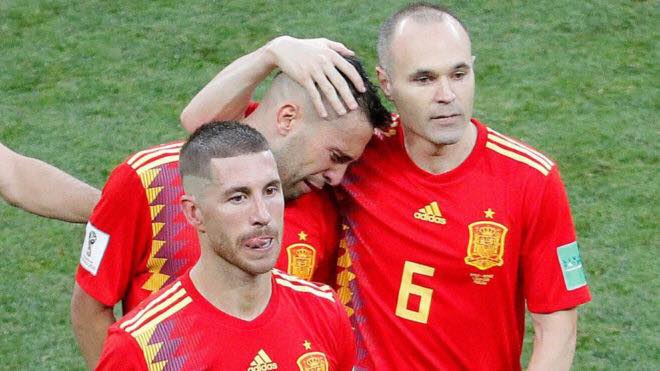 Al final, España en la casa. For all those who worried about the England manager’s judgement in kind of, sort of, with best intentions, managing to lose the dead rubber against Belgium, it now appears to be a masterstroke. Because even allowing for the traditional overreach of English expectations, there was nothing to fear here and now there is a clear route to the final without any obvious ‘big teams’ to stand in England’s way (although lest this seem presumptuous, mention of the word ‘Iceland’ should keep feet firmly on the ground).

After yesterday’s goal deluge between France and Argentina, followed by the technical virtuosity of Uruguay against Portugal, the game between Spain and Russia was as spartan as an Amish wedding feast.

Rarely has there been a game more suited to the phrase ‘let’s cut to the chase’. In truth, the two teams could have gone straight to penalties and spared us the experience of watching such a grim, attritional spectacle.

There was a moment in the second period of extra time when the Spanish coach, Fernando Hierro, stood on the touch line, his jacket soaked across his shoulders, his deep eyebrows furrowed in an intense, magisterial frown, as generals and leaders have stood throughout history as they watched their aspirations crumble in the face of obdurate Russian resistance. It was as if he knew the game was up, that for all Spain’s possession and passing dominance, the only thing that could save their World Cup dream was the one thing they seemed completely unequipped to do: score. Even the goal they did register was courtesy of a Russian boot.

And yet, in the final reckoning, it was not so much Russian heroism as Spanish lethargy that sees La Roja heading home. These were two very ordinary sides battling it out to be defeated by Croatia in the next round, let alone a potential semi-final with England. The whole of this game was like watching a pair of inebriated fighters  trying to conduct their brawl by taking wild, harmless swings at each other. No one ever looked like landing a punch, let alone a knockout. The belated appearance of Andreas Iniesta, in his now final international, enlivened the Spanish in the same way that a tattoo artist might invigorate one of the drunks by attempting to inscribe G-O-A-L on their knuckles. In truth, it was all too little too late.

The much feted Isco barely landed a telling ball all game; time after time his crosses would be swung in low when they should have been high, far when they should have been near. Sergio Busquets did not so much resemble a crab with his sideways passing as a factory in China producing millions of plastic crabs, all perfectly formed and all lacking the one thing Spain most desperately needed. Bite.

And as Iniesta retires from the national side, surely this means the end of the tiki-taka football of which he was one of the key exponents. But what differentiated the great sides with Xavi and Iniesta at their heart was an ability to probe and probe, recycling the ball relentlessly until the moment when one of the maestros would deliver a precision pass to exploit the space left by even the most tightly marshalled defence. But against Russia, Spain were all filler and no killer. There is no point having seventy percent possession or making a thousand passes when all of that activity is happening forty yards from goal.

Back and forth the ball went. They could have placed a net in the middle of the pitch running parallel to the touchline and it would have looked like Wimbledon. Without the long retired Xavi, and Iniesta for most of the game, tiki-taka became the ticking of a clock calling time on an era, and in the end, Russia didn’t really need to defend that hard. There were no last ditch tackles, no goalkeeping heroics required and in the technical area, Hierro’s frown became deeper and more perplexed.  On the occasion the ball did come over the top and turn the Russian defence, Diego Costa lacked the pace to be an effective lone raider. Normally Costa is a feisty character, snapping and snarling at the opposition defence, but in this match he, like most of the Spanish side, was toothless.

In the second period of extra time, there was just one moment that may give heart to the Spanish fans and whoever is appointed to take this side forward and rebuild. The ball was played along the right touchline and Rodrigo made a brilliant feint to turn his marker and streak along the wing, cutting into the penalty area and forcing Akinfeev in the Russian goal to make his best save of the match. Here was a glimpse, at last, at the death, of the speed and energy that has characterised the best teams in this World Cup, the complete antithesis of smothering tiki-taka and all the caution and inertia that has latterly characterised its inventors.

Russia are through, not necessarily deservedly so, because this was a poor game between two sides lacking any real conviction that victory was there for the taking.  Russia played as if to save face, almost in awe of their opponents, and Spain played keep ball and forgot that the objective is to put the ball in the net.  There is much for Spanish football, so successful at club level, to ponder if it is to regain its pre-eminence at the highest level of tournament football. For now, at least, the era of a thousand passes lies in ruins. Look on its works ye mighty and despair.