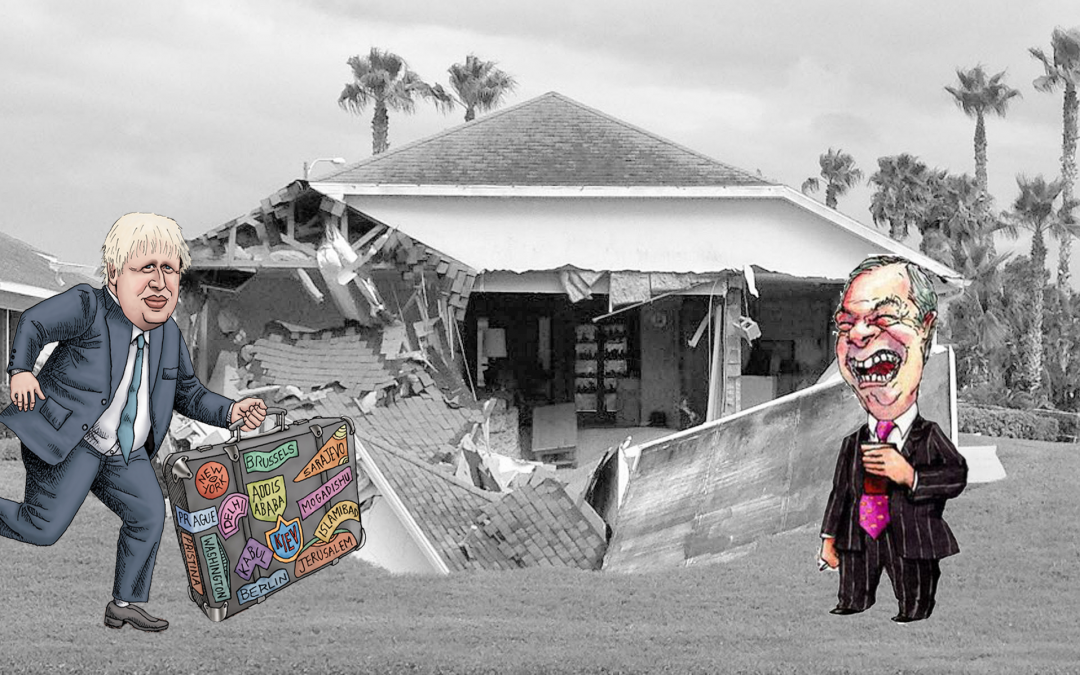 It seems to me that the start of 2018 has been a watershed period marking a clear, unequivocal shift in the reasons and rationale behind Brexit.

Until now, I think there has at least been a trace of intellectual consistency in the arguments of right wing politicians and ‘Daily Mail’ leader writers: that the ‘will of the people’ obliged the government to pursue any Brexit strategy it chose, regardless of the narrowness of the result or the lack of connection between the referendum question itself and the various outcomes being considered as a result.

I have long felt that this was the equivalent of arguing that because the average Leave voter had put down an offer on a house, they were obliged to complete the purchase, even if adverse information that the Brexit campaigners had deliberately tried to hide leaked once the offer was accepted.

That being the case, it’s become obvious that not only is our prospective new home a bit less attractive than first thought, it’s actually built on top of a sink hole showing signs of imminent collapse. Which begs the question of who in their right mind would plough their life savings into such a precarious undertaking?

So what has changed? The release of Whitehall assessment reports endorsing previous think tank studies that all paths to Brexit leave us worse off is the most significant development. For Brexit MPs and ministers to rage that such analysis reflects the malice of biased officials is a remarkable and very silly allegation. It undermines the professional principle of Civil Service neutrality upon which the smooth working of the British government depends. Without the expertise of the Civil Service in implementation, Brexit will stop dead in its tracks. It hardly seems like a winning strategy to write off the people you depend upon as biased incompetents.

But making enemies and turning people against you seems to be the settled approach of the Brexit ultras on the Tory backbenches. The way they queued up to divebomb the Chancellor for daring to suggest (in his Davos speech) that keeping frictionless trade with Europe would be a good idea, only emphasises how detached from reality their case has become.

The principle of economic gravity dictates that the EU will always be our most significant trading parter. Irrespective of the growth of Chinese or Indian or US markets, the proximity of the world’s largest free trade zone to the UK will always present the greatest opportunity. This is why the Buzzfeed leaks are so disturbing because they show that there is no outcome from increasing trade with, say, China, or the US, that can offset loss of revenue from Europe.

Ah, say the Brexiters (and their hostage, the Prime Minister), hold on a minute. What you are failing to take account of is the fact that we will negotiate a better deal when we leave the EU, so our starting point will be much better place than you are assuming in these scenarios, ergo the outcome will be better.

This might be credible if there were compelling reasons for thinking that Britain could negotiate a better deal. But almost two years after the referendum, we are not much closer than ‘it will be alright on the night’ to knowing how we will square the circle of leaving the EU and keeping all the benefits of membership upon which our prosperity depends.

Nothing suggests the Chinese are going to ride to our rescue by giving us an easy ride in bilateral trade talks. Compared to the opportunity represented by the EU-27 and their 300 million consumers, the UK inevitably is a smaller target. But Beijing also knows that the UK will be in severe need of a new trade agreement if UK/EU commerce is disrupted by Brexit. That means the Chinese are certain to invest and seek new trade deals, whilst striking a very hard bargain for doing so. If ‘taking back control’ was your big thing in June 2016, it’s difficult to see how losing the economic clout of EU membership and going it alone will help when British negotiators get into the ring with their Chinese counterparts.

Which brings me to my third point, the uncertainty about whether the UK will remain part of the EU Customs Union. Brexit agitators like Jacob Rees Mogg have rounded on officials and ministers for implying that such an arrangement might form part of the final outcome of Brexit. And sure enough, Downing Street has been cowed into stating that remaining in the Customs Union is absolutely not government policy.

But this is why I mock the Brexiters for their blind insistence that we can negotiate a better deal than the one we have presently and why the sober Civil Service assessments are far more likely to reflect the final outcome. Brexit is nothing like so much as a fiendishly difficult sudoku puzzle where as soon you feel you have locked one of your answers into place, you realise you have broken the grid elsewhere. No sooner had Theresa May’s office put out this statement, then Leo Varadkar was briefing journalists that this re-opened the question of the Irish border, which dominated news headlines in late November.

So this is what a sinkhole looks like. The EU-27 cannot give Britain the same access to the Single Market without the UK agreeing to be bound by the four so-called fundamental freedoms, including freedom of movement, that hardcore Brexiters will never accept. They rightly point out that signing up to such a deal would make Britain a rule taker, leaving us with all the obligations of membership and none of the influence. For an exercise that was partly about taking back control of our sovereignty, this would be a bizarre thing to do.

If we reject this option, however, then it’s politically impossible for the EU to allow Britain to compete in the SEM on the same terms that it does now. The notion that you can leave the EU but UK firms can continue to have the same competitive access as companies from member states is a complete nonsense. This matters not simply because of tariffs and other barriers to trade, but because of the regulatory compliance and standardisation that is necessary for ensuring that a free trade zone can operate.

Here is the cold reality. Brexit supporters say that we must leave the EU to take advantage of free trade. But the SEM is the most successful free trade construction in modern history. It unites 28 different countries and 350 million people into one single economic bloc, enabling not just free movement of goods but that of services and the people that propel them. The SEM works because all its members agree to comply with common standards for manufacturing processes, materials, health and safety, environmental standards and employment rights. This ensures a level playing field for all businesses to create fair competition and equal opportunities for all.

That is why the Irish border question, for example, is fundamental to any deal. It isn’t just some kind of parochial power grab by the Irish government. If the UK must leave the SEM, which has to happen for there to be Brexit, and is not going to remain in the Customs Union, then by definition, there must to be a hard border. Brexiters who say that “of course”, the UK would remain aligned with EU rules, whether literally or under the guise of another name, are just deeply confused.

But if Brexit means British regulatory standards will move away from those of the EU, potentially granting UK firms a competitive advantage, the Irish/EU must protect their internal market by excluding products that do not meet those standards. And that does not just apply to goods made in Britain, but to any products exported to Britain from other countries where importers perceive the potential for slipping them illegally into the EU market via the Irish land border. If Britain signs a trade deal with the US where food hygiene and safety standards, for example, are far lower than Europe, then a hard border is the only way to stop millions of pounds worth of agricultural imports into the UK from flooding Irish and EU markets via Northern Ireland.

And what doesn’t seem to have been factored in advocates of leaving is that once outside, the UK is a third country. The EU already has many trade agreements with other third countries that were difficult and complicated to negotiate – the Canadian agreement, for example, took seven years to conclude. It is also politically difficult for the EU to offer Britain unique terms as a third country without opening up a stack of complaints from other partners who will feel that they too should have the same degree of access or benefits that another third party country (Britain) would like to uniquely preserve. Outside the EU, why should Britain be a special case?

All these problems stem from manipulation of the Referendum result (‘should we leave the EU?’ in case anyone has forgotten) into hard Brexit, an outcome that was never openly proposed or discussed prior to June 2016.

There is no way to square this circle. Either Britain reverses the Brexit decision or we condemn ourselves to be poorer. Today, those seem to be the only options on the table.