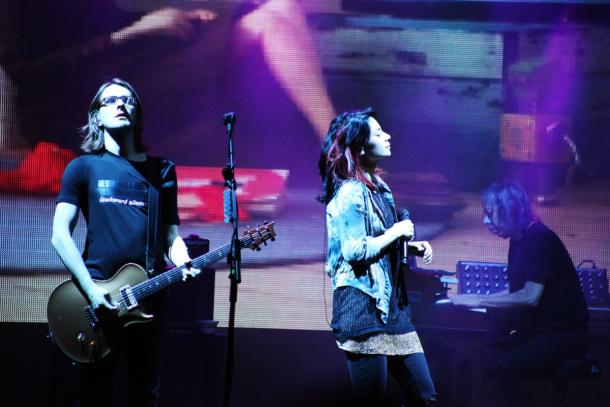 The path for any critically acclaimed artist with ambitions to become a household name must sometimes resemble a long hike up a mountain.  You start your journey at the trailhead, the equivalent of performing to a few hardy souls in an old parking garage in Poble Nou.  And all being well, you steadily climb above the tree line – bigger venues, bigger audiences – from where you can begin to admire the views.  But there is still just one more push to be made before you finally reach the top, so you keep climbing until you crest the ridge.  And that’s when you discover your goal was a false summit behind which lie the heights of Mount Coldplay glowing in the sunset, so close and yet so tantalisingly far of reach.

This is the challenge faced by Steven Wilson, whose European tour came to the spectacular concert hall setting of the Auditori Forum last month. Thanks to Wilson’s profile as a multifaceted artist, collaborator and producer, there’s no shortage of social media documenting his career.  It’s just that most of it begins with some kind of variation on the theme of “the most successful artist that you’ve never heard of”.

With his most recent album, 2017’s ‘To The Bone’, Wilson made no secret of shifting to a more pop-oriented style, talking up its lead single “Permanating” as a deliberate attempt to broaden his appeal to a wider audience, one that might approach his earlier, more progressive material in the same way they’d approach an unexploded bomb.  YouTube abounds with the English artist and the dazzlingly talented Israeli singer, Ninet Tayeb, performing “Pariah”, a song that fully deserves to be compared with Peter Gabriel and Kate Bush’s “Don’t Give Up”, to a succession of daytime TV studio audiences across Europe.

So, Steven Wilson is finally going mainstream.  Or is he?  On the evidence of his recent Barcelona performance, I think there’s still some climbing to be done.

The show begins with a simple, yet powerful, video juxtaposing word fragments like ‘love’, ‘fear’, ‘fake’, ‘truth’, ‘religion’ and ’security’ onto a series of static images: President Nixon, a CCTV camera, an Instagram group selfie, a terrorist, a scene of domestic violence.  The effect seems a little clichéd at first but then the loop begins to cycle with different word and visual pairings, gradually accelerating into a strobe of symbols and images.  It’s as if Wilson is suggesting that when faced with an overload of conflicting sensory input, we need to find some truths of our own because the external world is so confusing.  The way in which the patterns blur suggests the bewilderment and lack of control that so many people feel in society.  And yet many of us voluntarily surrender to the seductive lure of cyberspace for our intellectual and emotional nurturing.  It genuinely feels like the artist is challenging us to think about what we see and hear in his work.  All this and the band hasn’t played a note.

The opening is a tour de force from the ‘To The Bone’ album. “Six Feet Underground” is played with barnstorming vigour and a huge cheer lifts the roof when Ninet Tayeb comes on stage to perform a spellbinding version of “Pariah”.  It’s exactly the kind of crossover track that should be an international sensation. So why isn’t it?

Perhaps a clue lies in next song performed by Wilson’s virtuoso band, including former Kajagoogoo bassist, Nick Beggs, now transformed into a latter day prog legend. Of all the songs I would have chosen to follow “Pariah”, the extended jamfest of “Home Invasion” isn’t one of them. Instead of building momentum, the focus is lost as Ninet leaves the stage.  And then built again when she returns for a deliciously filthy “People Who Eat The Darkness” and then lost in the tight, aggressive instrumental funk of “Creator Has A Mastertape”.  In the constant switching of tone from when the Israeli singer is present and when she isn’t; from pop to prog; from boys with toys to something resembling a thinking person’s Fleetwood Mac, the dilemma becomes more apparent.

Steven Wilson is a musical genius but, quite understandably, he wants kudos and Coldplay-like sales figures.  Sadly, this may be an almost impossible balancing act for anyone who isn’t Peter Gabriel.  It’s like that line from ‘Fame’: you want fame, well fame costs.  Perhaps the ‘price’ to be paid by any cult artist with the potential to scale to a mass audience, is accepting that songs with videos featuring people with sinister, gigantic bird heads don’t appeal to those who listen to RAC 105.

I’m quite sure that Steven Wilson (and a large section of his following) would strongly disagree with what I’ve just written. He can sell out three nights at London’s Royal Albert Hall. His last record, ‘To The Bone’, was #1 in the UK album charts. He’s the go-to producer a host of rock legends turn to when they want the obligatory 5.1 remix of their seminal album from the 1970s. Who am I to suggest he’s not successful?

Of course, I’m not suggesting that, but the fact remains that his last album before ‘To The Bone’, the acclaimed and (for the most part) highly accessible ‘Hand. Cannot. Erase’ sold 250,000 copies instead of the 2.5 million its lush, melodic and intellectual brilliance deserved.

On the evidence of this performance, I think Steven Wilson faces a difficult but relatively straightforward choice for his next record.  Write an album around someone like Ninet Tayeb and effectively create a new identity to go after world domination or retreat back into the world of making and performing artistically accomplished albums for a substantial, but still numerically limited, cognoscenti. It may be challenging, especially if hardcore fans would rather he reformed his former band, Porcupine Tree, and toured their ‘Deadwing’ album, but I sense he wants more.  And on the evidence of tonight’s show, ‘more’ is really not so far out of reach.  Mount Coldplay beckons and it’s a long way to the top if you want to rock and roll.  But Steven Wilson has the music, the credibility and the talent to scale the heights.