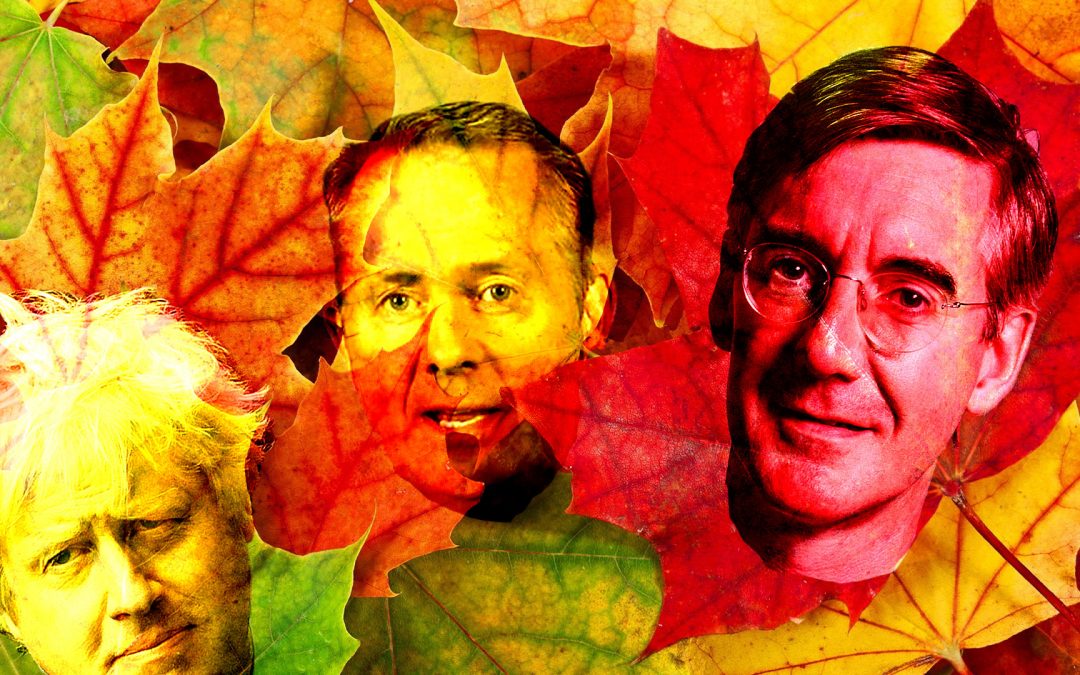 It’s late October and in Barcelona it feels as if the days are impatient to leave the summer behind.   Short-sleeved evenings are a fading memory as the chaotic and febrile atmosphere of the constitutional crisis in Spain casts a deepening shadow upon daily life.  The falling leaves echo the political situation.   Old certainties are being stripped from the trees.   What remains is stark and uncompromising.   The season of transition is well and truly upon us.

To those of us still fighting for Britain to stay in the EU, it’s as if the blithe, drunken, optimism of the Leave supporters is curling on the branches as the days become short and shadows lengthen.   It seems ironic that having held the EU Referendum on the longest day of summer in 2016, the economic winter that’s coming is shaping up to be like one of those in ‘Game of Thrones’ that may last for generations.

With negotiations between the UK and EU deadlocked for months over a raft of issues that were routinely brushed aside as ‘Project Fear’, the dead leaves of Brexit promises are piling up as the architects of the Leave campaign backpedal on the pledges they made to secure victory.  The sophistry of some of these statements, not just the notorious (and wholly false) “£350 million to the NHS” spending pledge is quite staggering.  Arguably, they are even more significant since they suggested a much closer relationship to the EU than is ever going to be possible once we leave.

Take Daniel Hannan, the Tory MEP, who before June 2016 suggested that Britain’s place in the Single Market (SEM) was “absolutely” not under threat, even though free movement of labour is one of the non-negotiable principles of SEM membership.  Afterwards, however, he was ridiculed for attempting to wriggle away from this by suggesting that “free movement of people” is somehow different to “free movement of labour”, as if the public would notice the distinction after all the wrong-headed hysteria about the impact of immigration on British society.

With unemployment at its lowest level for decades, it can’t be the case that migrants are “stealing British jobs”.  On the contrary, the economy would crash without millions of skilled and unskilled foreign workers.  And with the level of employment amongst EU migrants in the UK being higher than for native Britons, it can’t be the case that EU migrants are getting a free ride or scrounging from the welfare system.  Even if they were, the UK government has full authority under the EU’s Citizen’s Directive to deport jobless EU citizens if after six months, they have not found work, have no realistic prospect of doing so and require support from the welfare system.

Hannan’s contortions were mirrored by Nigel Farage (who else) suggesting that the UK ought to be like Norway – which is inside the Single Market and accepts the principle of free movement like any EU state.  Less than two months after the poll, Farage claimed that remaining in the Single Market (i.e. like Norway) would be a complete betrayal.

And he is joined in his apparent chronic lapse of memory by other leading lights in the Leave campaign who repeatedly and emphatically stressed that Britain could have all the benefits of free trade – like Norway and Switzerland – if it left the EU, ignoring the fact that those two countries are bound to accept freedom of movement (amongst other things) as the price for their access to the SEM.

Now as these and other wild assertions start to be exposed, doubts are seeping into the minds of less ideological voters – those whose ballot could ultimately have gone either way – in a way they couldn’t during the soundbite and fury of the original Brexit campaign.  Perhaps the penny is dropping, along with the pound.

And the mood also feels different amongst what Will Hutton describes as the ‘Brexit Ultras’ also.  The ebulliance of their post-Referendum triumph has been replaced by either a muted, almost defiant, tone – witness David Davis’s performance before the Brexit Select Committee on 25th October – or else, almost hysterical defensiveness – a typical example being the “Our Remainer Universities” cover article published by the “Daily Mail” the following day.  Forget the fact that higher education is supposed to be a cradle for intellectual interrogation and debate, the fervency with which some Brexiters pounce on any critical comment as an example of “talking the country down” just strikes me as the catechism of the unhinged.

Aside from the zealots, however, I think most Brexit supporters now concede that there will be significant challenges in the years ahead (ironically, the same difficulties they were so quick to dismiss before the vote).  Those who are insistent that everything will be fine if only we could leave the EU as quickly and completely as possible, are those who invoke Agincourt and Waterloo to bolster their arguments, waving the ideal of British exceptionalism in ages past to console fears of what may lie ahead.  But if the Battle of Crécy in 1346 is your reference point for how everything’s going to be alright then I question your credentials to negotiate free market trade agreements with China in 2017.   As the “Financial Times” said before the Referendum, Brexiters are five hundred years behind the times.  And maybe medieval campaigns aren’t the best antecedent for international affairs since England (not Britain) lost the Hundred Years War.

But far from seeing the concerns of business, Remain supporters and increasingly concerned Leave voters, reflected in Commons scrutiny, Brexit ministers and their pack of backbench attack hounds have done everything possible to avoid Parliamentary scrutiny.   It took a Supreme Court decision to force the government to recognise the right of Parliament to vote on Article 50.  DExEu has sought sweeping, monarchial ‘Henry VIII’ powers to avoid having to submit changes to existing statutes to Parliament for its assent.   And just recently there was uproar when David Davis intimated that it might not be possible to offer the House of Commons a vote of approval on the final deal agreed with the EU-27.   All of this is deeply disturbing given that one of the primary justifications given for Brexit was the need to re-establish the supreme sovereignty of the Parliament at Westminster.   But in spite of this, ministers like Liam Fox and Boris Johnson continue to behave like scheming tyros secretly and selfishly trying to use an elderly relative’s savings to fund a dodgy import/export business.

It’s one thing to argue that you dislike the EU so much that you would happily be poorer if that is what it takes to set Britain free and be independent.  But it’s quite another to attempt to deceive people that the trade offs don’t exist, or that the consequences – in terms of economic harm and ruin – will be relatively minor.