The meaning of ‘Life’ 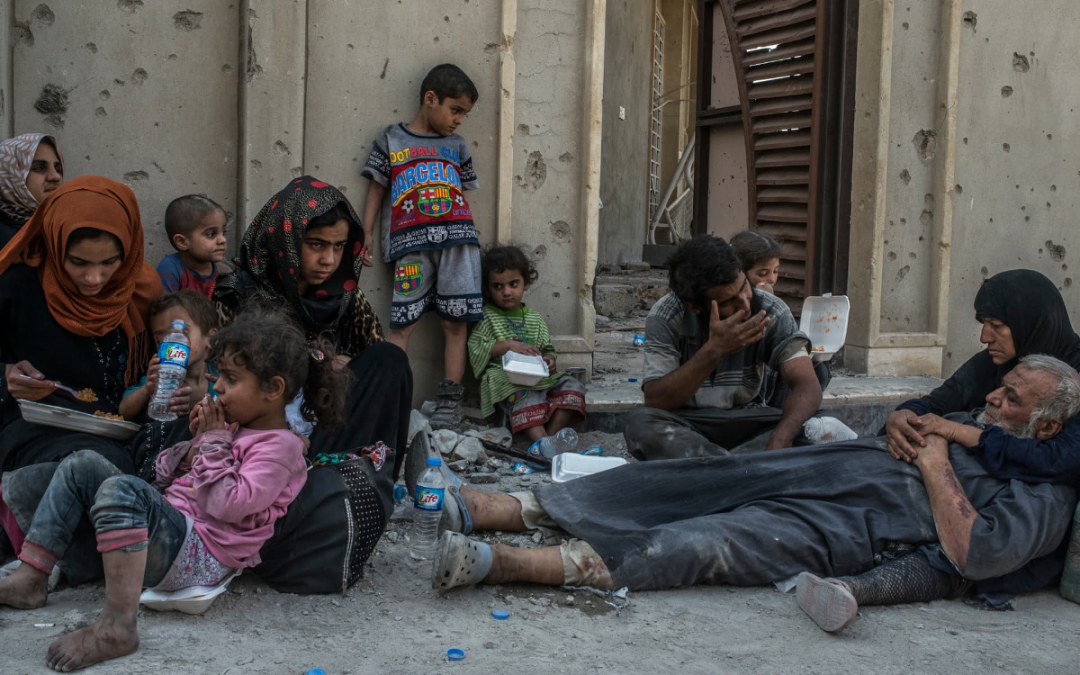 I came across this stunning photograph by Martyn Aim in an article about the battle to recapture Mosul from Islamic State. The image moved me because it goes beyond the transitory shock of eye-witness journalism to evoke the timelessness of suffering and tragedy during war. In doing so, it elevates the scene into something remarkable, reminiscent of the epic paintings of Delacroix or Géricault – the ‘Massacre at Chios’ or the ‘Raft of the Medusa’.

The setting itself is brutal; the ruin of a shattered building forms the backdrop, ravaged by bullets on the outside, a chaos of twisted doors and metal within. The family (we assume they are a family) are resting but their sanctuary is decimated. Nowhere is safe.

The figures in shot lie dusty, battered and exhausted. Four women. Two men. Six small children and infants. The oldest man seems to be the most peaceful, resting in the arms of his wife, eyes closed, as if in sleep. But looking closer we can see that a huge livid wound scars his forearm, raising the awful possibility that perhaps he has reached the end of his strength, or is perilously close to it. His wife clasps his hand, her expression stoic, like someone who has been drained by the conflict and is resigned to their powerlessness. The couple lie across from their younger relations, separated by a physical and emotional distance. If life is to end, they have lived theirs. It is the younger generation that must carry the shattering burden of having the future ripped from their grasp.

It’s the younger man who seems to be the most affected in this photo. He is raising his hand as if to cover his face in anguish whilst around him, the children sit or stand clutching takeaway styrofoam containers of food, which raises a jarring question of where and how that meal was provided in the midst of this chaos.

On the left hand side of the photo crouch three women. One is preoccupied with eating or feeding a small boy who thrusts a bottle of mineral water towards the camera so urgently it almost looks like a macabre product placement. Only in a setting as horrendous as this could ‘Life’ be a brand, neatly packaged with colourful logos and first world convenience. It’s the sickest joke; these people are alive but they have no life to speak of. Bottled water is a lifestyle choice, a discretionary commodity for a privileged society that has so much plenty it has forgotten the meaning of true need; a society that has, by and large, forgotten these people, sending water to prolong lives that are barely worth living. It seems this family has pretty much run out of choices other than the most existential.

The dominant personality is the young woman with a filthy child at her feet. Whilst the others look leftwards to some event off camera, she ignores everything and glares defiantly into the distance, refusing to play the game of emotional blackmail, refusing to seek our pity. How often do we glance at these photos in newspapers or magazines, and tut our compassion, before moving on with the normal routine of our day? In this photo, we are denied the catharsis of thoughtless sympathy for their plight. Too often, it seems we are inured to the pain of war victims and refugees. In 2017, nobody is marching in protest to demand action to alleviate their suffering. There is little or no prospect of rescue from outside. The refugees in Mosul know this beyond all doubt. They are the inconvenient truth of other countries’ foreign policy mistakes and the weakness of their own government.

Perhaps this is why the woman’s expression is intense, a mix of anger and shame, as if challenging the onlooker to look away from this macabre goldfish bowl. There is also something calculating in her gaze, like a captive gauging the height of a fence or strength of a lock, as if she will rise up and regain what control remains of her life the moment the camera departs. Until then, she steadfastly refuses to acknowledge she is an exhibit. Unlike the old people, she refuses to surrender her dignity as a human being. These are people, not animals in a zoo.

This is what transforms the photograph into an archetype of the suffering of war, something more than another despatch from the front. The ambiguities make it hard to be completely certain that this image is truly the fleeting glance of a transitory moment. The position of the family within the frame, the ambiguous presence of the food containers and bottled water, the differing responses to the presence of the photographer’s lens. These people are undeniably desperate but the moment does not seem entirely real in a literal, documentary sense. It almost seems a little too perfect or stylised in its depiction of refugees left destitute by war. But maybe that’s the point. The Iraq conflict has become the epitome of a unique kind of brutality towards innocent civilians. The identity of the protagonists no longer matters; the fighters come and go, all that remains is the endless cycle of misery.

I’m acutely aware that it may seem dangerously naive to question this from a position of safety, so I am at great pains to emphasise that I don’t think this diminishes the photo, or that it should be used to cast doubt on what is happening in Iraq and other places. What I am trying to say simply as a second-hand observer is that for me, the meaning of the photo is bigger than the frame it captures. Whether consciously or not, by creating an almost allegorical depiction of suffering, the photographer has transcended the boundaries of the current struggle against Isis in Iraq and Syria. The photo is as much an artistic statement, with universal power, like the ‘Massacre at Chios’, as it is a piece of photo journalism. It’s the kind of achievement that should be revered as a permanent testament to man’s inhumanity to man: a breathtaking masterpiece of a breathtakingly awful tragedy. And it’s also a testimony to the bravery and heroism of the men and women like Martyn Aim who continue to battle indifference, wilful ignorance and geopolitical hypocrisy to show us things that too many of us would prefer not to see, such as the child thrusting the ‘Life’ into our faces, imploring us to offer life back.

You can see more of Martyn Aim’s work and reporting from the Middle East conflict zones here: http://www.martynaim.com