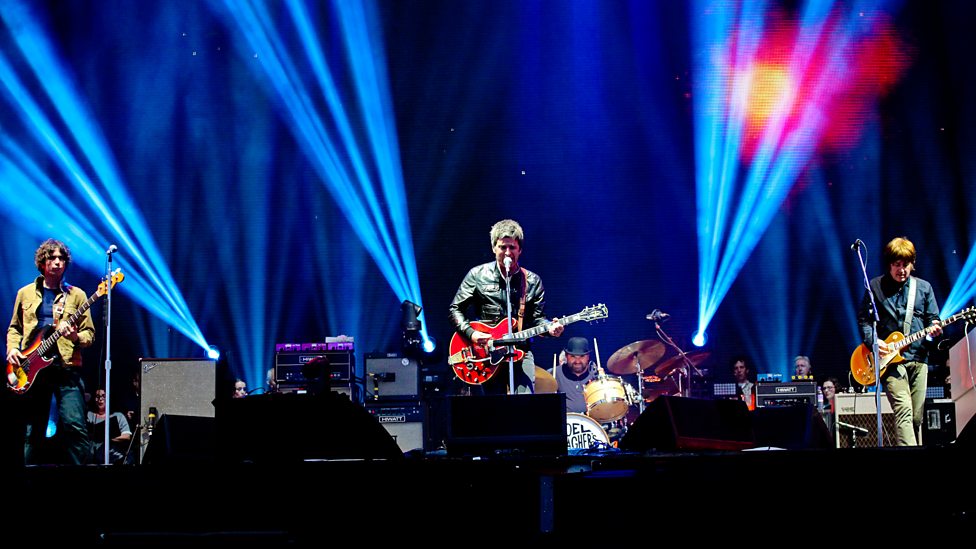 “The sound is rubbish,” says the lady standing next to us, addressing no one in particular. It isn’t, actually. If your favourite artist is of the status of Noel Gallagher, then the only places you’ll ever be able hear them play (unless you’re a family member or very lucky) are in venues like this: functional hangars of the kind they use to repair aeroplanes, stage gymnastic events or host trade shows. As hangars go, Sant Jordi Club isn’t too bad. You can at least discern the instruments in the wall of noise and Noel is on fine vocal form. But it’s not the sound that’s the problem.

Here’s the thing. When Liam and his band, Beady Eye, came to Barcelona last year, they played to about five hundred people in Sala Razzmatazz. There are perhaps two thousand people at tonight’s venue, including a lot of Brits for whom a weekend of Noel and sightseeing in Barcelona was the perfect combination for a city break. A decent crowd then for a mid-tier rock band plying their trade on the European tour, Montjuic tonight, Madrid tomorrow, Rome at the weekend. But this is Noel Gallagher. One half of Oasis. One half of a cultural phenomenon. One half of a band that could sell out three nights at Wembley Stadium in twenty minutes flat if the brothers could ever patch up their differences and announce a reunion. It’s not that the sound is rubbish, it’s more that there is something missing here. They could turn it up to one hundred and eleven and it wouldn’t alter the fact tonight’s show has the feeling of an artist avoiding his true calling. As the man himself once sang: because we need each other, we believe in one another and I know we’re going to uncover what’s sleepin’ in our soul. Throughout the set, giant shadows play along the walls of the arena, but none are so large as the one left behind by the absent Liam.

I’m at pains to stress that I really admire Noel. He’s a fabulous musician, the driving creative force behind Oasis and I am deeply drawn to his no-nonsense, ‘straight, no chaser’ charm and charisma. I know that he doesn’t view High Flying Birds as anything at all like the stopgap I’ve just described and – in the unlikely event he and I were sitting next to each other on the plane tomorrow – would likely rip my head off if I were to suggest it to him.

And I’m conscious of the fact that I don’t want to seem like one of those fans who regard their heroes as personal property, who exist purely to fill whatever void needs filling in a life more ordinary. No one on the outside can really question the kind of schism that led to the winding up of Oasis. It’s one thing to fall out with your band mates – and followers of other Manchester legends, The Smiths, have been carrying their regrets around for a generation – but to fall out with your brother in such a public fashion must be turmoil.

On the positive side, Noel is still more than capable of adding to his illustrious songbook. The High Flying Birds records are decent rock albums by any measure, full of melody and soul and performed with eagnerness and intensity this evening. If Oasis had never existed, they’d be deservedly applauded in their own right. But you can’t ignore what’s gone before, so when he launches into the open lines of “Champagne Supernova”, it takes me a few moments to recognise the slightly different arrangement, the unfamiliar vocal. And almost involuntarily, I turn to Beth and say, almost forlornly, “Ah, but you should see the Oasis version of this from the Manchester concert on YouTube”.

It’s twenty years since I last saw Noel Gallagher play live. And the first time, I didn’t even see him. At Knebworth, the crowd stretched to the horizon like a field full of barleycorn swaying gently beneath the light summer breeze. We were too far back to get even a glimpse of the stage, so we watched and listened on the giant relay screens, like an internet audience in the pre-internet age. I have no recollection of the performance whatsoever, except that I was there and that it felt important then, and now, to have been an eyewitness to something that still feels historic. I try to explain to Beth what it means to my generation to have been a twentysomething in Britain during that period, and how Oasis were the soundtrack to the zeitgeist, as indelibly part of the narrative of Cool Britannia as the Beatles and the Stones were to the Swinging Sixties. It was the fag end of Thatcherism and in New Labour there was a vibrant, political alternative, the country was surging with new found prosperity and economic zeal. And it was also the summer of Euro 96 and British art and culture were being celebrated on a global stage once again. Britain suddenly seemed to be awash with possibility, with swagger even, and to young people, no one epitomised that spirit of swagger and potential more than a couple of bad lads from Burnage whose music encapsulated the right here, right now of a country rebirthing before our very eyes. Supersonic? You could hear the boom everywhere. Normally history is something only recognised with the wisdom of perspective and hindsight. In 1996, history felt like the present tense, every single day. Looking at the country from afar in 2016, at the raging foment of Brexit, the scars of austerity, the hypertension about migrants and the screaming injustice of inequality, Britain seems unrecognisable.

I digress into all of this to try to explain why I felt a kind of sadness at the concert last night. I look at all these young Catalans giving up the love for Noel and I am happy for them that they get such obvious enjoyment from his music. And I’m sure they adore the old Oasis hits as much as any of the middle-aged Brits in attendance. But I guess I went looking for something that ultimately I didn’t find. That even as Noel performed the classics like “Wonderwall”, “The Masterplan” and “Don’t Look Back In Anger”, it wasn’t Oasis, there wasn’t Liam bossing the stage and it wasn’t 1996 and the heady summer evening of Knebworth. It was hard to connect.

Introducing one song as an old Oasis B-side, he quipped “Remember B-sides? ‘Course you don’t. I wonder what Adele’s best B-side is?” When Adele plays Barcelona next month, she will be in the fifteen thousand seater uber dome next door. She could probably play Knebworth if she had a mind. But is she a phenomenon? Does her music, for all its undoubted quality and appeal, symbolise and signify the present decade in the minds of those who are living through it in the same way that Oasis once did? Our world seems so complex and fragmented today, through politics, technology and strife, that the notion of any artist speaking for, and symbolising, the release of a generation seems anachronistic now.

In the mid-1990’s, young people had more hope, I think. The twenty-first century, the actualisation of post war society’s definition of modernity was about to be made real. How bright and progressive our lives were to become. But now, the new millenium feels like a busted flush, and that idealism has been scoured by wars fought on false premises, religious extremism, cut backs, climate change denial and corruption and inequality on a hitherto unimagined scale. Young people don’t look back in anger, they look forward, increasingly enraged and seemingly impotent in their ability to change anything. Noel jokes about buying Lionel Messi, the tax dodging footballing superstar for his beloved Manchester City, but we’re long since past the point when wealthy supporters could hike the prospects of their favourite club by shelling out a few million for a new stand or a star centre forward. The richest and most powerful – and even Noel isn’t one of those any more – play by very different rules. He knows it and we know it, especially this week as a butterfly flapping its wings in Panama creates chaos on other sides of the globe.

So maybe this is why I feel sad. The world is not what it was. My generation is aging. Idealism is, if not dead, then on hold. And Noel Gallagher and his High Flying Birds are still here, soaring over the mess below with their hard working, solid and plenty-good-enough fare for a long weekend in Barcelona. But they aren’t Oasis. And Britannia is cruel.