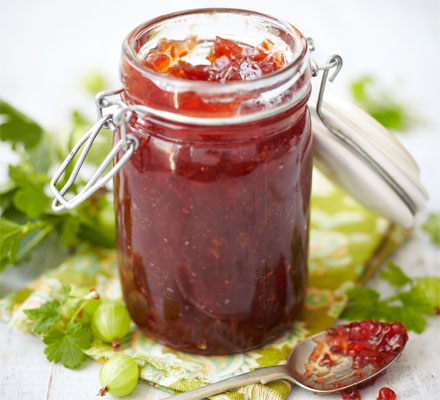 In my previous post, I looked at the question of whether a return to the fiscal rectitude of Victorian values was needed. I concluded that it wasn’t and owed more to that eternal right wing objective to permanently shrink public spending rather than any exigent need to lower the deficit.

In this second article, I want to examine a different question: regardless of whether we need to, is it possible to create a permanent budget surplus?

Politically and economically, permanent surpluses are difficult to maintain. At some point, governments come under pressure to either spend the money or cut taxes. Since spending is a no-go for this government, presumably that just leaves tax cuts. But history warns us that relentlessly cutting taxes does not lead to trickle down wealth, jam tomorrow for all. Rather it tends to rob the state of its ability to provide essential services, concentrates wealth in the hands of the few and widens inequality.  This is exactly what we have seen during the last six years.

Artificially eliminating all public borrowing also limits a nation’s ability to make strategic investments.  And if the government is withholding money by running a permanent surplus, private investors (e.g. banks) need to step in to fill the breach – in macroeconomic terms, surpluses and debts must balance each other out.  That might be okay if the increase in private debt was through responsible lending, but if we look at period before the last recession, it was largely used to finance asset speculation – e.g. property.  And we know how well that turned out.

We know that the Chancellor is looking to cut £12 billion from the welfare budget but details on how this will be done are still vague.  It’s a mystery to me how the government fought and won the election whilst managing to avoid revealing how those cuts would be made.  Now that details are beginning to emerge, it seems clear that if these spending plans go ahead, the post-war settlement that provided wealth, prosperity and security for millions of Britons will have been dismantled and there certainly won’t be enough money available to rebuild it.

Ah yes, say Conservative critics, but we are still just trying to fix the mess left by the last Labour government.  I wonder how long they can continue to blame the previous administration for their own policies.  Tory ministers like to smear Gordon Brown for ‘maxing out the credit card’ when in reality, both the deficit and the debt to GDP ratio was lower in 2007 just before the recession than when New Labour came to power.  The truth is plain to see in official data from the Office for Budget Responsibility. 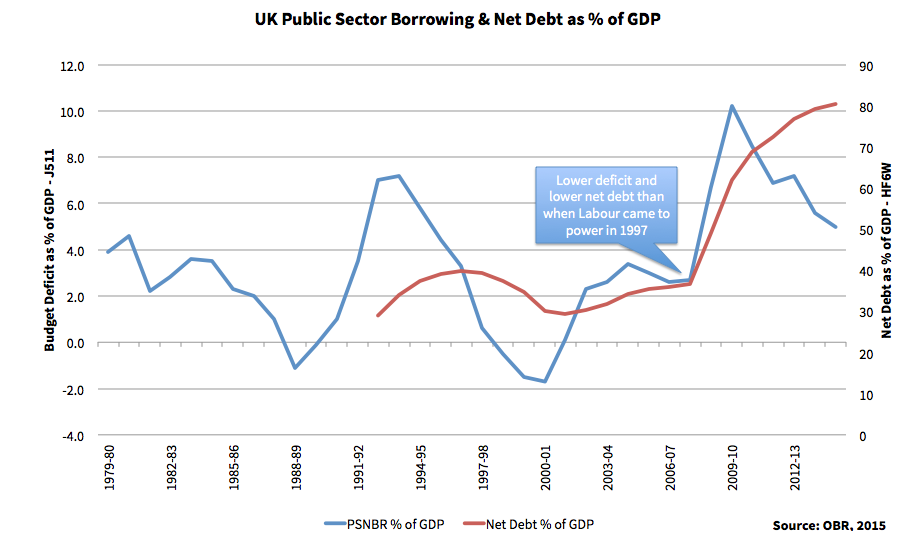 But in 2001, having established a record budget surplus (blue line) of £18 billion after three years of spending restraint, the clamour for using that money became impossible to ignore.

Labour chose to massively invest in health and education to try and repair a long period of Conservative neglect. Sure, Chancellor Brown could have offered tax cuts but given the already booming state of the economy, that would almost certainly have led to inflation, a big trade deficit and recession. Investing in the infrastructure of the nation and its potential was a better choice in my opinion and most people seemed to agree given the size of the Labour majorities in 2001 and 2005. I think people have very short memories about how bad things were by the time John Major was swept from office.

The acceleration of spending on health under Labour, and its subsequent flatline under the Conservatives, can be clearly seen in this summary of ONS data. 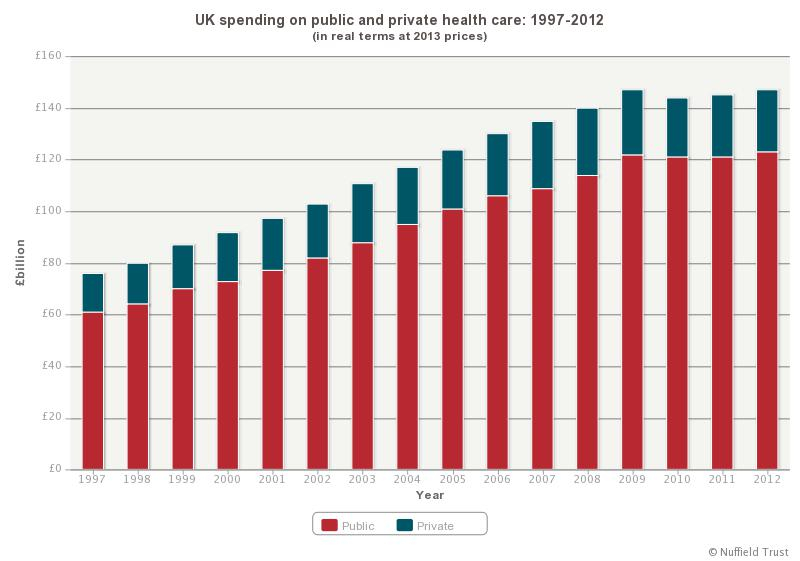 A broader overview of Labour’s priorities versus the Conservatives is summarised in this chart from the Institute for Fiscal Studies. Health and Education rose from 10.1% to 14.8% of public spending comparing 1996 to 2010. The full report is here: http://www.ifs.org.uk/bns/bn92.pdf 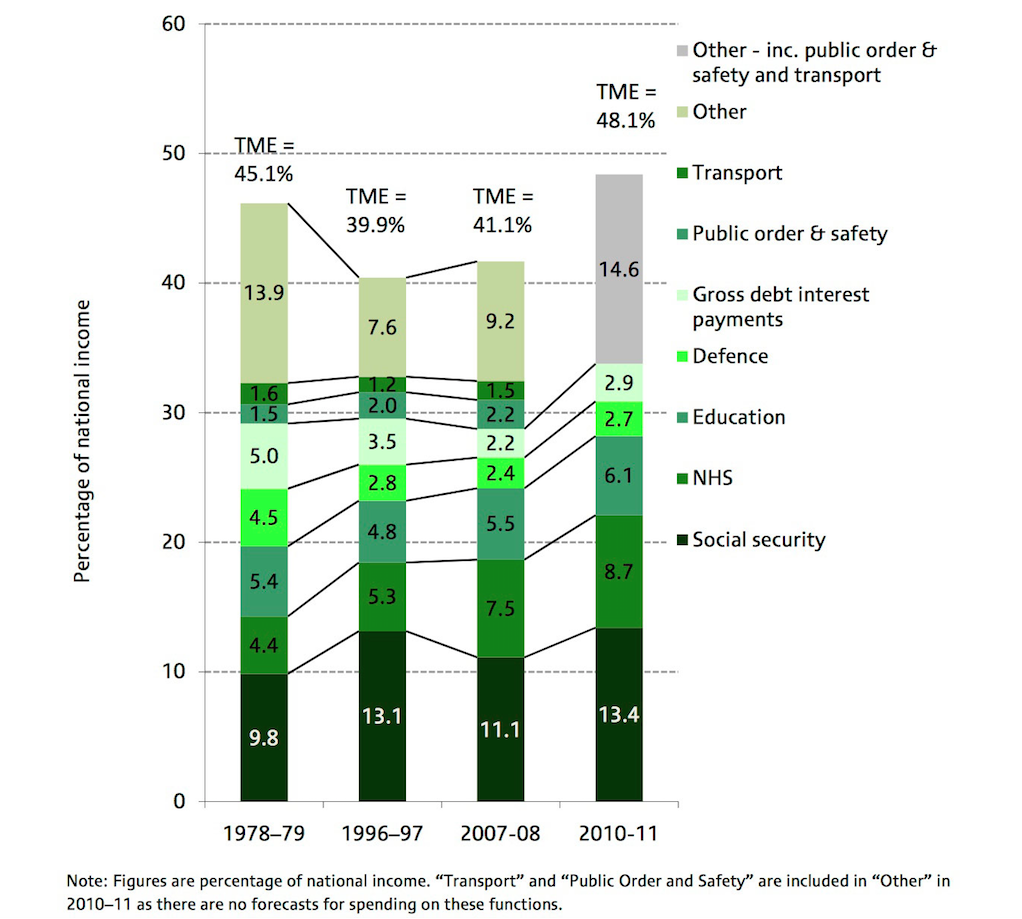 We already know how quickly George Osborne abandoned Austerity 1.0 when his economic mismanagement flatlined the economy. How long would the Chancellor keep wearing his self-imposed budgetary shackles if and when his voodoo trickle down economics failed to work?

So while anything is possible in economic theory, the political reality is a different matter. International creditors believe that it’s possible to force Greece to endure yet more years of hardship even though the impact of austerity on Greek society has been nothing short of savage. At the time of writing, the once unthinkable Grexit now looks more likely as Athens threatens to throw in the towel. But whatever austerity was supposed to achieve in Greece has patently failed to emerge. The unbending requirement for the Greeks to fully repay their creditors is neither economically nor politically credible.

Britain is not, and never has been, at risk of a Greek-style financial crisis. On the day of the 2010 General Election, ten-year bond yields were at 3.84% whereas Greece’s bond yields soared to more than 12% and Irish yields reached 9%. And throughout the course of the last Parliament, they ebbed and flowed between 2-3% suggesting that nobody in the financial markets felt the need to price huge risk into the bond yields as a condition for buying British government gilts. More to the point, countries like Britain that borrow in their own currency and possess their own central bank can also print money if nobody choose to lend or invest in them. No central bank can hold the UK to account in the way the Greek government is presently being challenged.

So does the political will exist in Britain to hold and maintain a permanent budget surplus?

When he was in opposition, George Osborne scoffed at the notion of legislation proposed by then-Chancellor Alistair Darling to enshrine permanent budget surpluses.

“No other Chancellor in the long history of the office has felt the need to pass a law in order to convince people that he has the political will to implement his own Budget,” said Osborne in a 2009 debate. “As one commentator observed this week, there are only two conclusions. Either the Chancellor has lost confidence in himself to stick to his resolution, and is, so to speak, asking the police to help him, or he fears that everyone else has lost confidence in his ability to keep his word, but hopes that they might believe in the statute book if not in him. Neither is much of a recommendation for the Chancellor of the day.”

Hmm, what changed? Was it a Damascene conversion or did failure teach George Osborne Victorian style humility? Maybe this is an example of Victorian values at work.

When he came to office in 2010, the Chancellor expected to reduce the deficit to around £40 billion by the end of the last Parliament. But his austerity policies so crippled growth in the first couple of years that the economy went into a flatline. Instead of ‘only’ borrowing £40 billion, Osborne was needing to borrow almost £100 billion by the time the 2015 election came around. In August 2014, Britain’s debt to GDP ratio was 77%, higher than at any time under Labour 1997-2010!

It is a simple fact that since the Conservatives took office in 2010, they have added more debt than every Labour government put together.

Rapidly rising unemployment added to the pressure on public spending, increasing benefit payments and reducing tax receipts during the period 2010-2015. Millions of people in employment were asked to accept zero hour contracts and low paying salaries, forcing them to become reliant on ‘in work benefits’ like tax credits, which further depleted the public purse.

And yet, in the midst of these budgetary pressures and challenges for low income households, the Chancellor lowered taxes for the richest members of society.

I don’t understand how conservatives can preach about the need for small government, when the inevitable outcome of reducing the role of the state in public life is income inequality, job insecurity and a greater need for welfare to support the millions of people left behind by the concentrating of wealth in the hands of the few. It’s plain wrong that the government should have to provide welfare payments to low paid workers because companies can choose to maximise profits and pass the moral responsibility for a living wage back to the state.

I don’t have a comparable graph for the UK but this US chart shows the rise of corporate profits compared to increases in workers’ wages. I suspect a very similar trend would be visible in Britain. 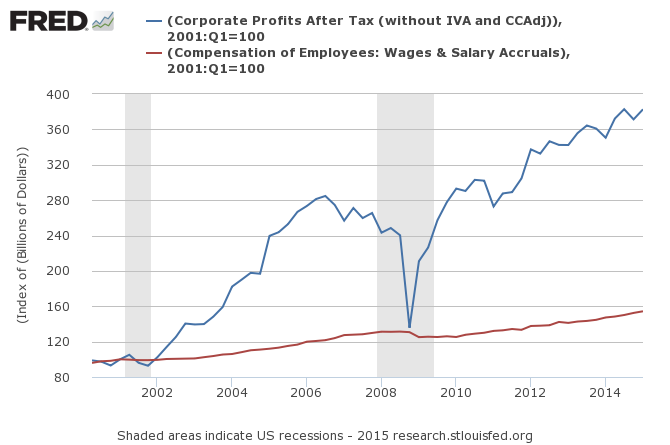 As a result, the UK’s low pay culture may be costing tax payers £11 billion per year according to research by community organising charity, Citizens UK.

Over 5.24 million people in the UK, (22% of all employees) are estimated to earn less than the Living Wage. As a result, the taxpayer is forced to step in and top-up incomes with in-work benefits so that employees can afford a basic standard of living despite being in employment.

And then business groups complain that state intervention gets in the way of free enterprise!

Ironically, the reason why debt and deficit targets went astray was because the Chancellor veered completely off target with austerity. Realising he was in danger of causing a severe aftershock to the Great Recession, Osborne relaxed his austere fiscal policy whilst still maintaining the rhetoric in public and blaming everything on Labour. According to Paul Johnson, the director of the Institute for Fiscal Studies:

“Mr Osborne has perhaps not been quite such an austere chancellor as either his own rhetoric or that of his critics might suggest. He deliberately allowed the forecast deficit to rise as growth undershot in the early years of the parliament.”

The net effect is that Britain has undergone a kind of recovery, helped by low inflation and low oil prices, but one where public finances remain precarious. This probably lies behind the Chancellor’s recent decision to sell off RBS. The revenues raised from that opportunistic sale, albeit at a loss, give him more wiggle room when Austerity 2.0 begins to bite. And bite it will. Concerning Osborne’s future plans, the Office for Budget Responsibility has already warned:

“This leaves a rollercoaster profile for implied public services spending through the next Parliament: a much sharper squeeze on real spending in 2016-17 and 2017-18 than anything seen over the past five years followed by the biggest increase in real spending for a decade in 2019-20.”

And elsewhere in the March 2015 OBR Economic Outlook:

“Another implication of the Government’s spending policy assumptions is a sharp acceleration in the pace of implied real cuts to day-to-day spending on public services and administration in 2016-17 and 2017-18, followed by a sharp turnaround in 2019-20.”

This is classic shock doctrine economics. Seize the moment – the unexpected majority victory in the 2015 election – to crash through the greatest amount of painful policy in the first two years, then ease off the gas in preparation for the 2020 poll with the damage done and things appearing to get better. As Paul Krugman says, this is ‘success’ only in the sense that it feels good when you stop hitting yourself in the face.

The first wave of austerity stopped the economy dead in its tracks. The second wave is predicted to be worse. Personally, I doubt this is possible. I have to believe that the social and political ramifications of this wrecking ball approach to reducing public spending will prevent the policy reaching its fruition. Which brings me on to final next question for next time: is this what we want?  I’ll cover that in my next post.