The miracle of Istanbul 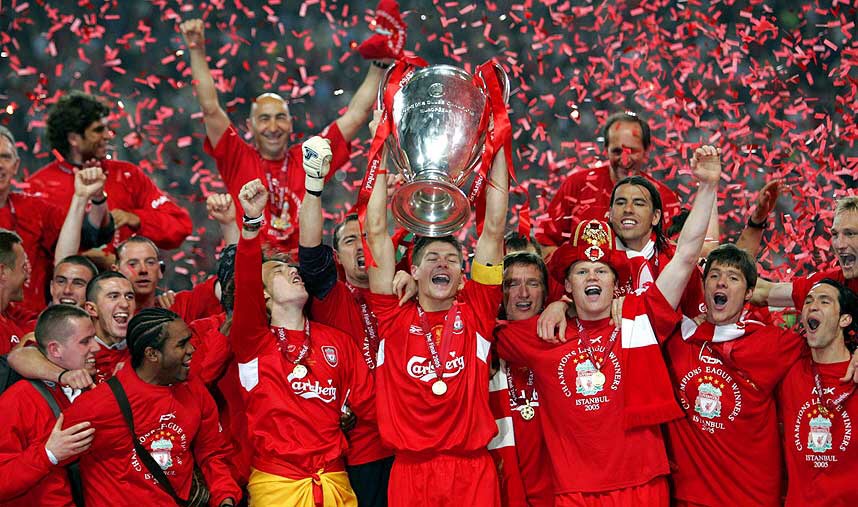 Every Liverpool fan has a story for where they were and what they were doing on the night of the miracle of Istanbul.  A lucky few were actually in the Ataturk Stadium, their ranks swelled by the tens of thousands of other supporters who weren’t but who like to pretend they were.  Like seeing The Beatles at the Cavern, or Jimmy Hendrix at the Marquee, our desire to be as close as possible to iconic events can sometimes defy time, distance and even memory.

In a way, I’m glad I wasn’t in the arena the night Liverpool beat AC Milan.  The closest I came to that kind of atmosphere was being at old Wembley when England lost to Germany in the semi-finals of Euro 96.  The tension in the crowd was so appalling during the shoot out that I couldn’t bear to watch, and instead crouched low, like a survivor in a burning building trying to find cleaner air beneath the suffocating smoke.  To this day, I have carried the psychological scars of that loss.  I thrill at the prospect of going to a major sporting event, but always at the back of my mind lurks the thought of the crushing disappointment that would follow defeat.

It would be great to be there if we win but it will be truly shit if we lose.

They may not realise it, but I think every sports fan is a living embodiment of Schroedinger’s Cat.  You could win, you could lose, right up until the final whistle, at at which point your dream will either be alive or very, very dead.

Thankfully, Liverpool fans were blessed that night by a sporting miracle, which even at the time seemed bigger than the actual events.  A decade on, and straight after the club’s worst league defeat for forty years, the legend doesn’t just cast a long shadow, it’s like one of those spaceships in Independence Day.  Let reflections on the season ended wait, however, and for just a moment, lets cling on to the ecstasy of things past. Liverpool fans have become good at that in recent times.

I never have any difficulty recalling where I was when Liverpool won their fifth European Cup.  Ten years ago, I was in Mallaig, a tiny fishing port in the north-west of Scotland, gazing across the windswept inner seas to the isle of Skye.  It’s the kind of place that the late, great, Bill McClaren would sometimes refer to in his rugby commentaries: some totally obscure village where locals might be out celebrating the achievements of one of their scions in the oval ball game.  The British mainland is one of the most densely populated regions on the planet but Mallaig felt like the ends of the earth.  And if that seems underwhelming, then our venue for the game was also about as far removed from ‘big game’ atmosphere as you could get.  We had to ask the barman to switch on the TV in a tiny, deserted pub, much to the disgust of the six Spanish fishermen who weren’t interested in the football and who sloped off to play pool.  They’d be back.

Everyone knows what happens next.  A goal behind within sixty seconds.  Maldini.  Nestor.  Crespo.  Kaka.  Shevchenko.  A team of legends lined up against cabbage patch heroes.  Yes, we had Gerrard and Alonso.  But we also had an injured Harry Kewell.  Djimi Traoré, the only man to Cruyff turn the ball into his own net. The mighty Igor Biscan.  Even Josemi (rhymes “with who the f***ing ‘ell is he?”)

Wave after wave of Milan attacks broke over the defence like the grey waves pounding the breakwater in the harbour outside.  Then came  a second goal, then a third, and our hopes and dreams were unravelling like a dreadful, balletic slow-motion car crash dreamt up by Krzysztof Kieślowski.  The Spanish fisherman laughed at our despair.  They couldn’t care less about the football although a sympathetic one from San Sebastián, home of Real Sociedad, mentioned something about Jesus and John Aldridge.  On Radio Merseyside, I’m told the real John Aldridge wept.

During half time, we seriously debated going home.  There seemed little point in doing anything else.  The only certainty was an AC Milan victory and based on the first half performance, a victory that would be as humiliating as it was inevitable.  Inside the dressing room, Jamie Carragher said the players were fearful of much the same.  Avoiding the embarrassment of a rout was the only thing that professional pride could cling to.  But as we all know, Rafa Benítez brought on Didi Hamman, Steven Gerrard leapt into orbit to score a brilliant headed goal and within six minutes of lunacy, we were level.

I wish I could say I have vivid memories of the second half and extra time, but to be honest, my timeline is blurred.  This was 2005.  There was no Twitter, Facebook or Instagram (God forbid, the web would have burst!) I remember feeling crushed at half time. I remember that too well.  But what I also recall is a conviction, after Gerrard scored the first goal, that we were going win.  Call it animal spirits, blind faith or voodoo, there was just something in the moment that transformed the logic of football reality.  One minute, all hope was lost, the next, anything seemed possible.  Maybe it’s just rose tinted fancy but I’ve never had the same feeling at a sporting event since that night.  Istanbul was different.  Victory seemed to be written in the stars that could not be seen below the low Scottish clouds.

As the seconds ticked by, everyone was riveted.  Like prisoners in solitary with no place to go, we stood, we sat, we walked around.  The pub was much the same size as a cell.  A few locals wandered in having heard there was something going on.  And the fishermen were laughing now because it was all so ridiculous.  Beyond football said one, with all the casualness of a man who didn’t need to care about the outcome.  Those of us who did floundered in a sea of tension, in which we would sink and then struggle back to the surface for air over and over again.

Somewhere along the way Andrej Shevchenko stopped my heart with a header.  The ball hung in space like the period beneath a question mark, the still point of the turning world, weighing up the possibilities of alternative destinies.  And then it chose to cannon into Jerzy Dudek’s glove, my heart re-started and the world went upon its way as if no other choice had ever existed.  We simply could not lose.

Liverpool won the 1984 European Cup on penalties but the 2005 shoot out was a very different affair.  Normally penalties shred the nerves of the watching fans, but having watched Liverpool come back from the death of  3-0 down now we were the zombies.  We had nothing left to give.  I remembered Dudek pretending to be a demented space invader but I had forgotten the extent to which he moved around as if the goal line was electrified beneath his boots.  And until watching highlights recently, I had no idea who had taken the Liverpool spot kicks.  Even the replay didn’t really trigger any real time memories.  So that’s what happened?  All I know is that we won.

We won.  I grew up watching Liverpool win European Cups.  My jumpers for goalposts mythologies are based around Terry McDermott carving through the Borussia Mönchengladbach defence; Tommy Smith rising like a lock forward in the line out to burst the net with a header; Kevin Keegan tearing down the centre of the pitch like a heat-seeking missile with Berti Vogts clinging to his heels; King Kenny chipping a wedge shot into the Bruges goal and taking off across the ad hoardings on the Wembley outfield like a hurdler in full flow; the infinite improbability of Alan Kennedy responding to a butterfly flapping its wings in Australia to score against Real Madrid in Paris, 1981;  Bruce Grobbelaar’s legs wobbling Francesco Graziani’s resolve as the Italian blazed his penalty high into the Rome sky.  They are all great memories and in a way, it’s sad that Istanbul, with its fantasy football and folklore, has almost entirely subsumed those fantastic achievements of the 1970s and 1980s.  And it has to be said, although few now mention it as such, that it dispersed some of the memories of Heysel in the sense that at last, Liverpool football club and Europe could be associated with something glorious once again.  For all the celebrations ten years on, no one should forget that Liverpool’s fifth European Cup was supposed to have been won on 29th May 1985, in Brussels rather than Istanbul.  Whilst victory over Milan reflected the utmost joy of football and sport, I hope that enshrining the memory of the ’39’ never becomes a less powerful force in Liverpool’s affairs than the desire to remember the ’96’.  The club and its fans will always owe those Juventus supporters the same respect as our own.

But although I think that needs to be said, I would like to end on a positive note, which came back to me as I looked at photos of Steven Gerrard wrestling the Champions League trophy out of the withered clutches of Lennart Johansson.  It’s almost comedic that after two hours of unbearable football and human drama, during which both sides had exhausted themselves mentally and physically, the first person to claim the prize, to lift the trophy aloft, was a pensioner whose only known sporting achievements were in a Swedish game called bandy, a bizarre cross between football and ice hockey.  Ever the politician, Johannson knew UEFA’s cash cow was going to be the front page news across the planet by 9am the following morning and brazenly he wanted a piece of the action.  But the moment Gerrard holds the trophy aloft dispels all gripes about politicos and wannabes.  That roar of triumph almost shatters the sky.

The Champions League trophy is, of course, the old European Cup, which is without doubt the most beautiful trophy in the whole of sport.  Isolated, on a plinth in a museum, it looks ungainly and crude, with its large elephant ear handles and swollen belly.  But in the supercharged atmosphere of the stadium, when flourished in the moment of victory, the trophy is transformed into a titanic emblem.  Here is a prize worth winning.  Its huge dimensions suddenly make sense in the manner of something deeply primeval, almost tribal.  When the captain grasps the handles and lifts up the giant silver vase, it feels like he is wrestling history into the sky.  And the size of the trophy means that every one of the thousands of followers in the stands can see the prize, just like warriors on the hillside gloating over the demise of the vanquished general.  Victory is done and seen to be done.

Ten years on, the satisfaction of that moment never becomes any less fulfilling or surreal than it was the night we were ‘dancing in the streets of Mallaig’ with the crew of a Spanish trawler and John Aldridge wept.