A friend of mine who went to a minor public school once confided to me that the experience had been akin to a gladiatorial training camp, a regime where you either developed the ability to project total confidence and mastery at all times, regardless of your underlying feelings, especially hurt, or you were ripped to shreds like sardines thrown into a shark tank. I think this explains the ability of some publicly schooled and privileged politicians to maintain thick-skinned faith in the rightness of their ideas, regardless of all arguments to the contrary, and to assume, with equal conviction that their views and opinions matter more than anyone else’s.  For that reason, one of the most energising aspects of the Election Debate on Thursday was not so much what happened in the debate as what occurred after it.

History may tell us that the sight of three women, Leanne Wood, Nicola Sturgeon and Natalie Bennett, embracing after the event was a powerful re-defining moment in British politics. I certainly hope so. For much of the last five years, politics has felt more masculine and testosterone-fuelled than ever with the jeers and sneers of PMQs becoming increasingly vituperative. The boorish pre-eminence of male politicians like Nigel Farage, and a gaggle of identi-kit public schooled Tory backbenchers suddenly let off the leash, has left little room for compassion and kindness at Westminster.

And was the Prime Minister ever less ministerial and assured than when snarking “Calm down, dear” to Ed Balls during one particularly heated debate a few years ago? Whilst perfectly entitled to disagree with an opponent he dislikes (some say loathes), using a tone and a phrase that conjured up images of saloon bar toadies telling the old girl to mind her place spoke volumes for the Prime Minister’s character. The fact that he tried to wriggle out of criticism by saying he was only repeating an advertising slogan made famous by Michael Winner hardly made things any better. The director of ‘Dressed To Kill’ wasn’t renowned for his feminist sympathies even before he became Patronising-Bore-In-Chief writing pompous restaurant reviews for ‘The Sunday Times’. Trying to claim irony for a slogan coined by one of the most unironic men on the planet wasn’t the PM’s finest moment.  Cameron once worked as a PR executive; all I say is that he couldn’t have been a terribly good one.

And so, with the Conservatives projecting the absolute confidence of those who feel born to rule, aided and abetted by their embarrasing cousin, Ukip, it’s unsurprising that the political rhetoric has been relentlessly harsh and negative, with welfare, immigration and anti-EU sentiment the dominant subjects. Health, social care and the housing crisis have been very much secondary news throughout most of the last Parliament.  At times it has felt like the single biggest threat facing the nation has been the spread of Dziennik Polski in newsagents across the land. And whilst there is nothing inherently ‘masculine’ about the first three topics, the confrontational and usually aggressive way in which points are made and rebutted across the despatch boxes has left little room for softer, more empathetic virtues. Political virility in the era of ‘Calm down, dear’ has been measured either by your toughness on scrounging or the way you hold a pint.

That is why Thursday’s debate was so radically different to anything seen in British politics since, well, when?

When have a collective of women ever owned the stage in the way the three leaders did, both during and after the discussion? Yes I know British politics was once dominated by a woman for a decade, a woman whose shadow still looms large over conservative thinking. But at her political peak, and in posterity, Margaret Thatcher was characterised not so much for her embrace of womanly values, but by the way she eschewed them. The Iron Lady was perfectly happy to be seen as a ruthless leader who despised and abused her acolytes. If Margaret Thatcher can be said to be womanly, then for me, she did it in the spirit of Lady Macbeth: by surpassing the males around her in the doing of all that may become a man.

Whilst I wouldn’t suggest for a second that the leaders of the SNP, Plaid Cymru and the Greens are anything other than extremely intelligent, professional and very focused individuals, they are still, most definitely women in their style and substance. Chauvinistic opponents may dislike Nicola Sturgeon’s sharp tongue and legally-trained ability to think on her feet – her response to Nigel Farage “It’s ridiculous”, “Yes, you are Nigel” being a perfect example – but she is a long way away from being baptised as the new Iron Lady. I get the impression that the main reason most of the old boy network in Westminster and the sympathetic Tory media loathe Ms. Sturgeon is not because she is Scottish, not because she is a nationalist, but because (in their eyes) she has committed the cardinal female sin of being a shrew, which usually means an independent, intelligent woman who is patently cleverer than they are. Like Ed Miliband, I completely disagree with her core political beliefs of breaking up the United Kingdom. But she is very impressive in the way she expresses those beliefs and her desire to see a fairer and more equitable society.  Those are things I can agree with.

The morning after the debate, the absentee landlord, David Cameron, predictably warned of the ‘coalition of chaos’, seeming to miss entirely that most of the country found the debate to be passionate and for more insightful than the tired weekly pantomime of PMQs. Nigel Farage was clearly perplexed, never more so than rounding on the audience at Westminster Hall for being a bunch of BBC stooges. It’s as if the Ukip leader is finally starting to realise that the great groundswell of support for his party may be nothing more enduring than a traditional by-election protest vote. At the end of the discussion he stood dejected and rejected, the air leaking from his balloon of boorish confidence. As the General Election draws closer and Ukip becomes more exposed to scrutiny, so does its empty and mean agenda. Are you thinking what I’m thinking? No, we’re not Nigel. At times, one could almost see the tumbleweed blow across the stage when Farage’s comments were met with a deathly silence. 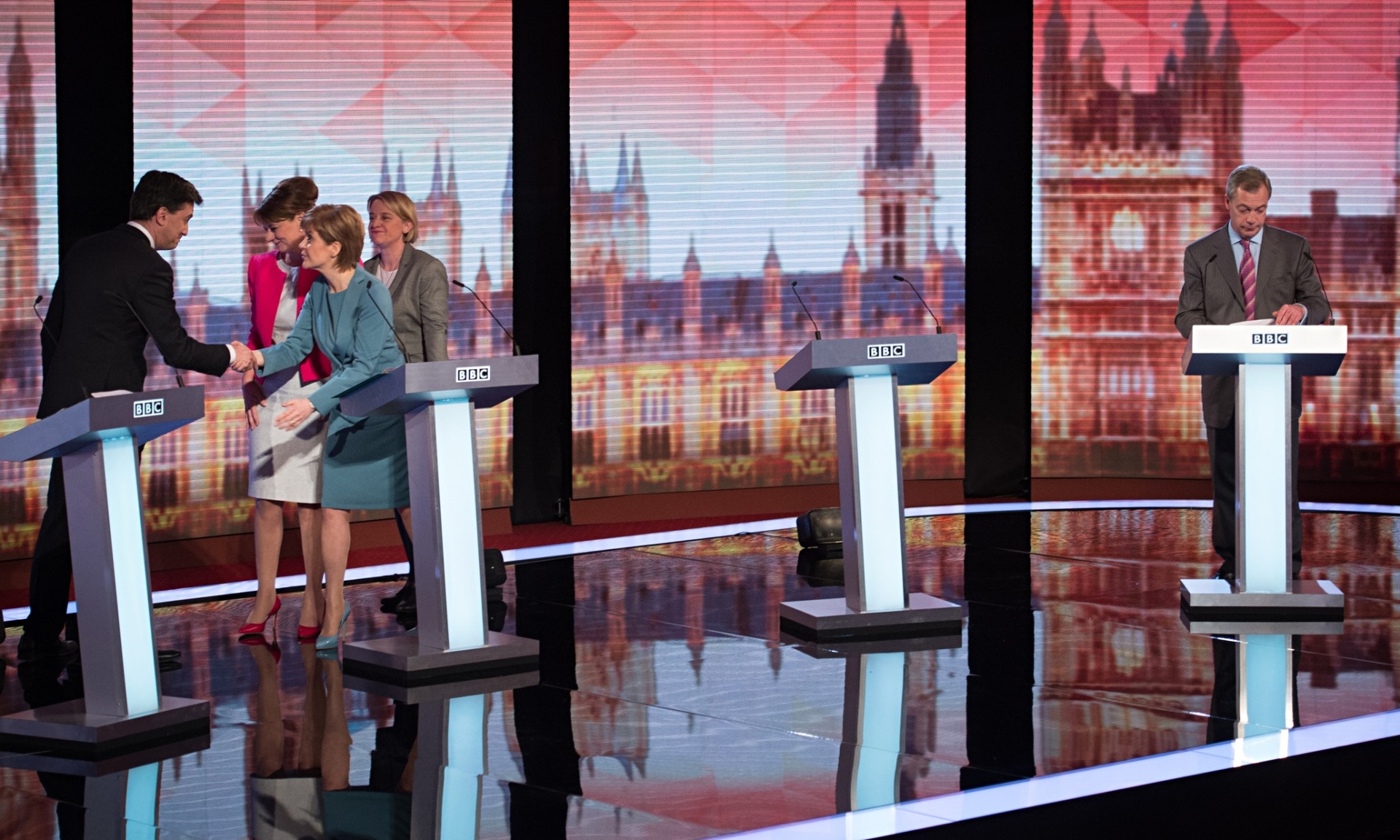 And so back to Nicola, Leanne and Natalie. I don’t deny that it takes a certain kind of ego, male or female, to become a top class political operator. These ladies are certainly not soft touches. But there was undeniably a softness in their language and in their agenda that has been entirely missing in government since 2010. We heard a lot about the deficit, for sure, but what we also heard was that deficit or not, that was no excuse for shafting the unemployed, the disabled or the immigrants (who pay more in tax per capita, on average, than native Britons). For almost two hours, we were repeatedly given a vision of a more humane country where, tough choices or not, the assumption would be that the poor, the elderly and the vulnerable should not be cast adrift. I don’t mean to be in the slightest bit chauvinistic when I say that this highlights why we need more women centre stage in British politics. Had the debate been a four-way between Clegg, Miliband, Farage and Cameron, any vision of how life could be made better for the poor would soon have been trampled by all the ‘tougher-than-thou’ head butting.

In their summing up, all three female leaders focused on the need to create a fairer, more generous, more integrated society. It was a little depressing, therefore, that in his conclusion Ed Miliband reverted back to alpha male stereotype by challenging Cameron to come and try to duff him up, one-on-one, mano o mano, any time, any place, anywhere.

It would be wonderful to think that as a result of Thursday’s debate, and with the increasingly likelihood of one of these women holding the balance of power in a hung Parliament, we might be about to enter a new politics where ‘getting in touch with your female side’ isn’t some kind of mortal insult. In terms of the number of women MPs in the main legislative body, we’re only 65th in the world which, almost a century after the Representation of the People Act, is hardly great progress. Even Iraq has more women in parliament.  David Cameron talks about giving people ‘the good life’ but since he came to power, for the majority of people in this country, life has been worse than before and for a minority, the weakest and most at risk, it’s been truly awful. It seems fitting that the most powerful symbol of Thursday’s debate, therefore, was a hug not a zinger. Hopefully it’s a sign of things to come.