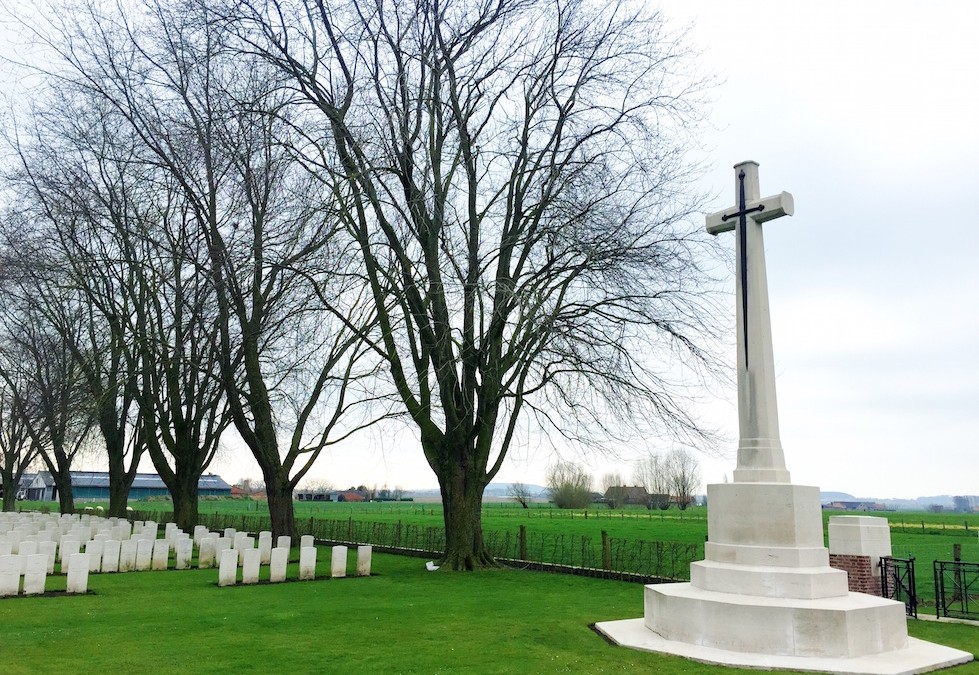 I’m a big cycling fan and early Spring marks the opening of the serious professional bike racing season. There are two major one day races, the Ronde Van Vlaanderen (or Tour of Flanders) and the Paris-Roubaix that take place on consecutive weekends, and the second of these marked the final road race appearance of the great Sir Bradley Wiggins. Although I visited Ypres a couple of times on school holidays, neither my girlfriend or I had spent much time in Belgium before, so we decided we would do go on a bit of a mystery tour whilst taking in the cycling at the same time.

Although there was a great deal of fun and adventure in watching ‘In Bruges’ (one of my favourite films) actually in Bruges, there was another more personal reason for visiting the region. My great-grandfather Robert Forshaw Twist, is buried in New Vlamertighne Military Cemetery just outside of Ypres. Robert was killed in June 1917 three months after a home visit during which my grandfather, Bob Twist, was conceived.

The kind, dear man I remember from my childhood never met his own birth father. The man he knew as Dad was his mother’s second husband, Walter Johnson, who sadly passed away long before I came on the scene.  Based on what I’ve been told, my granddad and Walter were close – as he himself said, Walter was the only father he ever knew.  But I can’t help but wonder if my grandfather retained any enduring sadness at his birth father’s death; remembering him to be such a thoughtful, compassionate and undemonstrative person, (meaning he was quiet and calm, not artificially ‘buttoned up’ – you could never hope to meet a more genuine person than Bob Twist), I’m sure he must have felt some kind of sadness.  But for his family, like millions of ordinary working families in the 1920’s and 1930’s and even after the Second World War, a trip abroad was not the casual weekend break it has become today.  Pragmatism and surviving came first.  Making a pilgrimage to visit a foreign war cemetery would probably have been regarded as an irrelevant luxury.  As far as Mum and I know, I might well have been the first member of the Forshaw/Twist/Johnson/Dodd family to visit Vlamertinghe, and it was an honour to pay our respects on behalf of all those people who had not had that opportunity in the past.  And for me, it was a tremendously powerful moment to be in the presence of the man who made my life possible, thinking both of my grandfather and mother standing behind me and feeling the thin, red bloodline of fate connecting us all through the years.

I do feel as I become older, and as society becomes ever more fixed on the transient – the 140 character tweet, the six second Vine, the Instagram hashtag- that it’s important to remember and learn from the lessons of the past. I certainly think that visiting a military cemetery would be a worthwhile experience for every school child, not to preserve – as Wilfrid Owen, described it – the “old myth” of dulce et decorum est, pro patria mori, but to make them realise that nationalism and isolationism are dangerous things we underestimate at our peril.  A century on, already the Great War feels like something that happened to other people, different from us, a conflict that is difficult to scale and comprehend.

But I think we underestimate the relevance of the wars of the twentieth-century at our peril.  Only through co-operation, mutual respect and closer understanding do we set aside the divisive forces that drove European nations to war and become more harmonious as a collection of nations. In April 2015, as we enter an election period when immigration and the supposed difference of the British people is set to be a key issue, I am deeply passionate about the positive aspects of European integration which are never more profound than when viewed in a cemetery, in a corner of a foreign field, commemorating a relative who died during the first of two great wars that ripped Europe apart in the twentieth century. We are not as different as some on the right would like to think we are. I hope my own children will continue to live as members of a European community that for all its imperfections, has helped keep the continent from major conflict for over seventy years.

Inscription on the headstone of my great-grandfather, Robert Twist, in New Vlamertinghe Military Cemetery 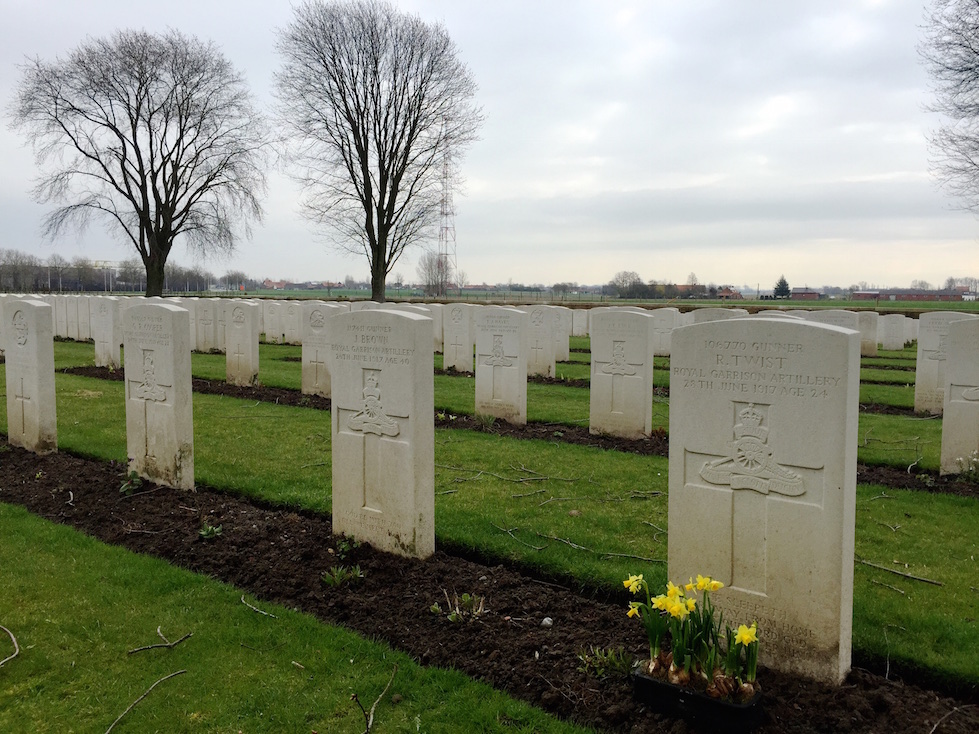