Cheating at Cluedo. How Conservatives do it all the time. 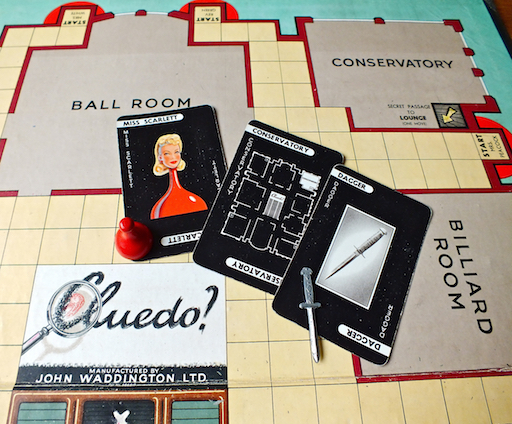 Imagine you’re playing a game of Cluedo. You’re pretty certain that Professor Plumb committed the crime using the candlestick in the library. But when you make your accusation, your opponent simply takes the cards out of the sealed envelope, ignores the contents and pins the blame on Colonel Mustard.  With the dagger. In the kitchen. And claims victory, whilst blaming you for being stupid.

Of course, that would be ridiculous and unfair but it’s the best analogy I can come up with to explain how conservatives have been able to consolidate their position in Britain and America today.

Today, right wing politicians and commentators pin the blame for the crisis on the profligacy of big (e.g. left wing) government. Ever since taking office in the UK, Conservative ministers have repeatedly criticised their Labour predecessors for ‘maxing out’ the nation’s credit card and pledged to balance the books and stop the country from living beyond its means. In the US, Republican National Committee spokeswoman, Kirsten Kukowski, described the problem and cause, thus:

“Washington spending is out of control. Under President Obama and Harry Reid’s leadership, we are spending money we don’t have.”

All of which would be fine if it were true.

Conservatives say that austerity is a necessary price to pay for our former profligacy, as if the worst recession since the 1930s had nothing whatsoever to do with our present difficulties, as if the financial crisis wasn’t the mother of all elephants in the tiniest of rooms.  And the primary reason why we are still battling recessionary forces six years after the collapse of Lehmann Brothers is because austerity – the simultaneous contraction of public sector spending even as private demand collapsed – has created a vacuum in which growth and renewal has been smothered and remains vulnerable. Pulitzer Prize winning economist Paul Krugman, op-ed columnist in the ‘New York Times’ explains that:

“The economy isn’t like an individual family that earns a certain amount and spends some other amount, with no relationship between the two. My spending is your income and your spending is my income. If we both slash spending, both of our incomes fall.”

In Britain, the product of Conservative austerity has not been a revived economy but a string of missed targets and the cruel promise of years of belt-tightening ahead. Given that so many people are already struggling to get by, and many public services are on the brink of being unable to cope, one shudders to think what the future could look like.  In its response to George Osborne’s Autumn Statement, the independent Institute for Fiscal Studies predicted that future spending cuts would be “on a colossal scale” under the government’s plans and that they would change the role of the state “beyond recognition”.  These are waters uncharted since the 1930s, since before the establishment of the Welfare State and the National Health Service.

Those on the left, like myself, have two problems with this.  Firstly, ideologically, we disagree with the conservative vision of the small, denuded state.  The majority of people have never lived in a country where public spending as a % of GDP is as low as it will become if George Osborne has his way.  Those who have are appalled by the prospect.  Secondly, purely from the standpoint of economics, it doesn’t make any sense.  In a recession, government expenditure should be crucially necessary because only public spending can fill the gap and put unemployed resources to work when the private sector can’t. In this situation, argues Krugman, echoing John Maynard Keynes, it’s pointless to worry about budget deficits and inflation. History has shown that stimulus, when applied at the right time, can be a temporary corrective that gets the economy moving again and allows for playing fiscal catchup later.

On the contrary, Osborne’s austerity policy has completely failed to bring the turnaround he boasted about. By cutting public spending at precisely the moment private demand was contracting, he killed off any hope of swift economic recovery. Throughout this parliament, it has led to lower tax returns and less revenue to pay for rising unemployment and in-work welfare benefits.  In 2010, the government projected that in 2014/15 its total tax revenues would be £700bn. In fact, they will be £646bn, according to the OBR.

The fact that the British economy is finally starting to show limited signs of recovery is hardly a consolation.  As Paul Krugman says:

All economies recover from a slump sooner or later. Keynes himself never denied that this process would take place eventually. But his argument was that after the kind of shock we have experienced in the last seven years, the natural process would be too slow and too weak to produce a quick or full recovery.

Sadly, this is not the logic that has held sway since the financial crash. As a consequence, millions of ordinary people have faced hardship, poverty and a reduction in the quality of their public services. Central banks have tried to stimulate growth by lowering interest rates close to zero and by pumping trillions of dollars into the economy through quantitative easing with largely mixed results: cheaper money has stimulated some growth, but a fair chunk has simply been diverted into asset investment rather than lending, thereby helping to fuel income inequality.  Overall, it is hard to stimulate growth by making debt more attractive and encouraging private spending when the world is paranoid about debt and inflation.  This, as Keynes also famously observed, is like pushing on the end of a piece of string.

George Osborne has failed by a wide margin to meet his deficit-reduction targets in this parliament. Linking fiscal tightening with recovery – ‘expansionary austerity’ – was a foolish strategy.  Nor can he claim that this is somehow Labour’s fault.  The Conservatives have had a full term of office to demonstrate how austerity policies would make things better.  Instead, the deficit is higher than ever and our public services are close to breaking point.  The country is febrile and restless, social attitudes towards immigration and Europe are retrenching.   After five years, and within sight of the next election, the UK finances are nowhere near the figures Osborne promised to deliver, not even close.

When it came to power in 2010, the coalition promised that it would be borrowing £40 billion by this point of the electoral cycle. Instead, it is on course to borrow around £100 billion. Deficit reduction has gone into reverse and on top of this, the lives of millions of working class families are more challenged than they have been for generations.  And there is still more, much more, pain to come.

This brings us to another of the paradoxes behind the recent US mid-term election results and the continued weakness for liberal politics in the polling booth that makes me very nervous about the future of Britain. Inequality.

Although the U.S. economy has performed better than its European counterparts, there the fruits of the recovery aren’t being shared equally. Ninety-five percent of the wealth gained since the recession has been earned by the wealthiest 1 percent. There are more unemployed people and a higher percentage of long term unemployed. Most of the jobs gained since 2012 are low-paying ones, with real wages declining. A recent survey by the National Association for Business Economics found wage raises are getting even rarer, even as growth picks up steam.

And yet a left-wing protest movement Occupy Wall Street (OWS) has largely failed to be recognised as a credible political force and in some instances has been monitored by US federal authorities like a terrorist group.

In November 2011, Public Policy Polling conducted a nationwide survey that found 33% of voters supported OWS and 45% opposed it, with 22% not sure. 43% of those polled had a higher opinion of the Tea Party movement than the Occupy movement.

Jon Stewart of the Daily Show puts it more succinctly:

“If the people who were supposed to fix our financial system had actually done it, the people who have no idea how to solve these problems wouldn’t be getting shit for not offering solutions.”

This situation is mirrored in the UK. An October 2014 report from Credit Suisse found that Britain is the only G7 country to witness rising wealth inequality in the period 2000-2014. The report suggested inequality has risen four times faster in the seven years after the crash compared with the seven years before. The rich in the UK are becoming richer faster than ever under the Conservatives. And it gets worse. Credit Suisse predicts a 40% increase in wealth on the assumption that real estate prices will rise and new financial services will raise income. But as Professor Danny Dorling of Oxford University has pointed out, such a massive increase in wealth is unlikely to come simply from boosting productivity.

“The projected increase is a massive claim over the lives of others, over their labour, over their property, because a few at the top can create new financial instruments and say they have created wealth.”

In a speech given in October 2014, Andy Haldane, the chief economist of the Bank of England, stated that real wages (wages adjusted for inflation) have fallen by around 10% from their pre-recession peak. This represents a fall in living standards that is unprecedented since the middle of the 19th century. As a consequence of the recent falls, for those in the bottom 20% of the earnings distribution, real pay is back to its 1997 level. Meanwhile, the top 10% have seen their real pay increase by about 20% over the same period.  And the Institute of Fiscal Studies, in its response to the Chancellor’s Autumn Statement, pointed out that changes to personal tax allowances and benefits would provide bigger gains to richer households and individuals than to those on low incomes.

This pseudo-recovery has also produced far higher welfare spending owing to the large number of working people who are still dependent on state help to offset meagre salaries. Instead of criticising the working poor and migrants, the right would be better advised to task employers to pay their employees a fair living wage and focus on stimulus rather than austerity.

Now you would have thought that faced with right wing government policies that have been making things worse, compounding a situation that was created by conservative ideas to begin with, the public would vote to reject more of the same.

But no. The right has done a remarkable job of re-inventing itself as the saviour rather than the perpetrator of the mess we are in. And people are buying the myth. Liberals are like the child left holding the booby prize when the music stopped. They didn’t ask for it, didn’t want it, and now it’s all their fault.  I am deeply worried.